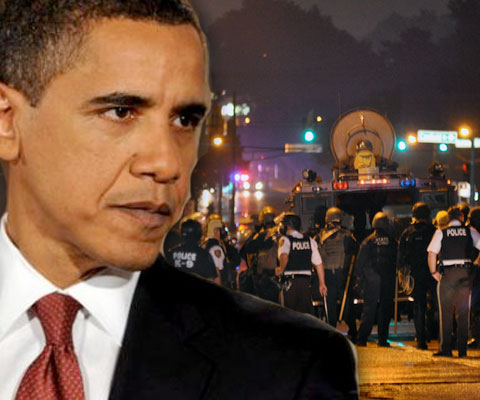 With the help of President Obama and key media figures, the plight of inner city blacks against police brutality has become a major source of divide in society, as high profile cases including Freddie Gray, Michael Brown, Eric Garner and, of course, Trayvon Martin, have driven a narrative that has communities demanding police accountability and on watch for the next incident that could stir the pot.

The country has witnessed riots in Baltimore and Ferguson and wide scale protest and civil disobedience movements growing in response to issues of police abuse and excessive force.

As these cases stir reaction, police forces have countered with an increasingly militarized presence, using riot gear, tanks, sound weapons, gas canisters, rubber bullets and other ‘weapons of war’ to control crowds and use intimidation to instill order.

Now, President Obama – who has been critical of police and eager to implement federal controls over local departments – is announcing a “ban” on the sale or transfer of many of these military items to local police units:

President Obama has banned the sale of the most some kinds of military equipment to local law enforcement agencies in response to widespread criticism of a paramilitary-like response to riots in a St. Louis suburb last August.

In doing so, Obama put his stamp on the recommendations of a multi-agency federal working group that recommended banning sales of some military equipment and providing more training, supervision and oversight of others.

Banned will be tracked armored vehicles, bayonets, grenade launchers, camouflage uniforms and large caliber weapons. Other kinds of equipment will be available to most police departments as long as they meet national policing standards, track their use and receive approval from the federal government before selling or transferring it.

The controversial MRAP armored vehicles will be “controlled” by not prohibited.

The ban will coincide with Obama’s speech in Camden, New Jersey to announce initiatives to address the lack of transparency in police abuse cases, and ways to improve police-community relations – which have conveniently boiled over in a politically expedient way. President Obama’s decision is based upon the recommendations of a working group (PDF), an extension of his January 2015 Executive Order 13688, establishing Federal Support for Local Law Enforcement Equipment Acquisition.

•Tracked Armored Vehicles: Vehicles that provide ballistic protection to their occupants and utilize a tracked system instead of wheels for forward motion.
•Weaponized Aircraft, Vessels, and Vehicles of Any Kind: These items will be prohibited from purchase or transfer with weapons installed.
•Firearms of .50 ‐ Caliber or Higher
•Ammunition of .50 ‐ Caliber or Higher
•Grenade Launchers: Firearm or firearm accessory designed to launch small explosive projectiles.
•Bayonets: Large knives designed to be attached to the muzzle of a rifle/shotgun/long gun for the purposes of hand ‐ to ‐ hand combat.
•Camouflage Uniforms: Does not include woodland or desert patterns or solid color uniforms.

While another long list of equipment will be “controlled” by federal oversight:

RECOMMENDATION 1.2 — CONTROLLED EQUIPMENT LIST:
•Manned Aircraft, Fixed Wing: Powered aircraft with a crew aboard, such as airplanes, that use a fixed wing for lift.
•Manned Aircraft, Rotary Wing: Powered aircraft with a crew aboard, such as helicopters, that use a rotary wing for lift.
•Unmanned Aerial Vehicles: A remotely piloted, powered aircraft without a crew aboard.
•Armored Vehicles, Wheeled: Any wheeled vehicle either purpose ‐ built or modified to provide ballistic protection to its occupants, such as a Mine ‐ Resistant Ambush Protected (MRAP) vehicle or an Armored Personnel Carrier. These vehicles are sometimes used by law enforcement personnel involved in dangerous operating conditions, including active shooter or similar high ‐ threat situations. These vehicles often have weapon ‐ firing ports.
•Tactical Vehicles, Wheeled: A vehicle purpose ‐ built to operate on ‐ and off ‐ road in support of military operations, such as a HMMWV (“Humvee”), 2.5 ‐ ton truck, 5 ‐ ton truck, or a vehicle with a breaching or entry apparatus attached. These vehicles are sometimes used by law enforcement in rough terrain or inclement weather for search and rescue operations, as well as other law enforcement functions.
•Command and Control Vehicles: Any wheeled vehicle either purpose ‐ built or modified to facilitate the operational control and direction of public safety units responding to an incident. Command and Control vehicles provide a variety of capabilities to the incident Commander, including, but not limited to, the provision for enhanced communications and other situational awareness capabilities.
•Specialized Firearms and Ammunition Under .50 ‐ Caliber (excludes firearms and ammunition for service ‐ issued weapons): Weapons and corresponding ammunition for specialized operations or assignment. This excludes service ‐ issued handguns, rifles, or shotguns that are issued or approved by the agency to be used during the course of regularly assigned duties.
•Explosives and Pyrotechnics: Includes “flash bangs” as well as explosive breaching tools often used by special operations units.
•Breaching Apparatus (e.g. battering ram or similar entry device): Tools designed to provide law enforcement rapid entry into a building or through a secured doorway. These tools may be mechanical in nature (a battering ram), ballistic (slugs), or explosive.
•Riot Batons (excluding service ‐ issued telescopic or fixed ‐ length straight batons): Non ‐ expandable baton of greater length (generally in excess of 24 inches) than service ‐ issued types and are intended to protect its wielder during melees by providing distance from assailants.
•Riot Helmets: Helmets designed to protect the wearer’s face and head from injury during melees from projectiles including rocks, bricks, liquids, etc. Riot helmets include a visor which protects the face.
•Riot Shields: Shields intended to protect wielders from their head to their knees in melees. Most are designed for the protection of the user from projectiles including rocks, bricks, and liquids. Some afford limited ballistic protection as well . Riot shields may also be used as an offensive weapon to push opponents.

Self-Serving Agenda: Increasing Federal Control of Police in the Name of Civil Rights

While this restriction on the militarization of police is surely a step in the right direction, it appears to be quite self-serving, as the sale of military-grade equipment and other new toys to local departments ramped up significantly under Obama’s two terms.

As reporters noted a couple of years ago, this armored vehicles and weapons of war have been reaching American streets via military surplus programs, a policy that existed under previous presidents, but proliferated under the Obama Administration – making this latest announcement essentially the solution to his own crisis:

“During the Obama administration, according to Pentagon data, police departments have received tens of thousands of machine guns; nearly 200,000 ammunition magazines; thousands of pieces of camouflage and night-vision equipment; and hundreds of silencers, armored cars and aircraft,” Apuzzo wrote.

Also in that inventory of slightly-used or good-as-new goods are M-16 rifles, grenade launchers, silencers and more — all going to towns many Americans would be hard pressed to find on a map or globe.

Since 2008, Apuzza reported, nearly 900 MRAPs and other armored vehicles have been handed out by the Pentagon to police agencies, as well as 533 aircraft, 93,763 machine guns and 180,718 magazines.

Last year, an investigation by the Associated Press revealed that “a disproportionate share” of $4.2 billion in Pentagon property handed out by the Defense Department military surplus program since 1990 was “obtained by police and sheriff’s departments in rural areas with few officers and little crime.” (source)

Many have taken the militarization of local police as a sign of the de facto War on Americans and other agencies, with battlefield weapons giving police often disproportionate and seemingly unnecessary force to deal with what is often low or moderate levels of crime.

At its heart, local police departments are the ones clashing with inner city communities and mass protests; yet, their militant build up has been egged on by Homeland Security and other federal agencies over concerns about terrorism, etc., while Pentagon surplus programs for armored tanks and other equipment have made these arms cheap and nearly irresistible.

That distinction will be missed by many, as police departments come under increased scrutiny – though for good reason – while the feds are casting themselves as saviors – for all the wrong reasons.

It is more than clear from the working group that the intention is to place authority for law enforcement equipment in the hands of the federal government, essentially using the issue of militarized police as another entry point for intrusion from Washington into local jurisdictions.

According to the document, the feds will be operating prohibited equipment lists, and requiring local agencies to make acquisitions and purchases through the federal government – after, of course, submitted detailed information and justifications for their actions. Many of the “banned” items will still be available to local police, with “special authorization and use limitations.”

That same federal government will oversee mandatory police training on militarized equipment, along with training regarding the protection of civil rights in communities.

While no one wants to live in a police state – and things have definitely gone too far already in some cases – it is worth keeping in mind who it is that is out of control. For every step too far that local police have taken, the feds are surely ahead of them by a mile.

The federal government and the Obama administration are under fire for a variety of unconstitutional programs aimed at both militarizing and controlling local police and law enforcement, including supplying a vast array of sophisticated U.S. Defense Department “weapons of war” to city and county governments. Billions of dollars in military equipment has already been handed to municipal police departments and county sheriffs’ offices nationwide under the rapidly expanding federal schemes…

One of the biggest concerns expressed by opponents is the threat to the independence and local accountability of police represented by unconstitutional federal handouts — most of which come with “strings” attached.

However, amid mounting outrage and concerns over what more than two thirds of U.S. voters say is an “out-of-control” federal government that is “threatening basic civil liberties,” the administration is stepping up its showering of military equipment on local law enforcement officials.

There is a monster, and it has been created in Washington.