NYC Terrorist Identified As Sayfullo Saipov – Expected To Survive Bullet To Gut – Originally From Uzbekistan and Entered U.S. in 2010 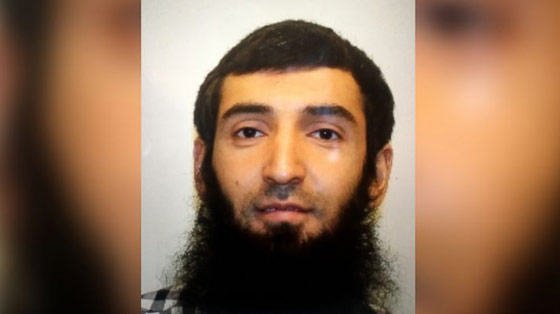 Police have identified the suspect responsible for murdering at least eight people and injuring a dozen more after driving a rented pickup truck for 14 blocks along a bike path in Manhattan.

Originally from Uzbekistan, Sayfullo Saipov entered the United States in 2010. It is not clear if he is authorized to reside in the U.S.

EXTREME VETTING NOW: The radical Islamic terrorist's name is Sayfullo Saipov. He came to America in 2010 from Uzbekistan.#Manhattan pic.twitter.com/KsrT9Xui5x

The driver was shot in the abdomen by police after jumping out of the truck with what turned out to be a fake gun in each hand and shouting what witnesses said was “Allahu Akbar!,” Arabic for “God is great,” authorities said. He underwent surgery and was expected to survive.

Officials who were not authorized to discuss the investigation and spoke on condition of anonymity identified the attacker as 29-year-old Sayfullo Saipov and said he is from Uzbekistan and came to the U.S. in 2010. He has a Florida driver’s license but may have been staying in New Jersey, they said.

The driver barrelled along the bike path in a rented Home Depot truck for the equivalent of about 14 blocks, or around eight-tenths of a mile, before slamming into a small yellow school bus. The mayhem and the burst of police gunfire set off panic in the neighbourhood and left the pavement strewn with mangled bicycles and bodies that were soon covered with sheets.

Graphic images of the attack appeared on social media within minutes:

President Trump, tweeting before any additional details of the attack were made available, immediately identified the attack as an act of terror. Scores of responses to his Tweet either argued that Trump was responsible for it or denied any connection to radical Islamic terrorism despite the fact that witnesses reported hearing Saipov scream “Allahu Akbar” during the incident:

In NYC, looks like another attack by a very sick and deranged person. Law enforcement is following this closely. NOT IN THE U.S.A.!

While many called for Trump to “own it” and “take responsibility,” none mentioned that Saipov entered the country under President Obama’s watch:

Actually, yes, in the USA. This happened ON YOUR WATCH. Own it. Take responsibility for it. Pro-tip: a ban isn't the right answer. #DBAD

Travel ban or a wall will not stop it though

Trump will delete this tweet if we find out the attacker was white and not a Muslim.

We MUST, with your leadership Mr. President, MAKE AMERICA SAFE AGAIN ??.