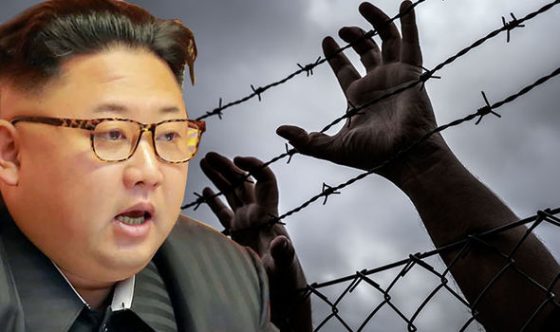 As North Korea continues to violate human rights on almost every level, news is now surfacing that the tyrannical regime doesn’t just starve their political prisoners.  Kim Jong-Un’s brutal dictatorship also feeds the corpses of those starved to death to the dogs.

In difficult to hear testimony in front of United Nations, North Korean defector Ji Hyeon-A explained how government officials in the hermit kingdom beat her and fed her only rotten food. Ji has escaped the regime three times now, and all three times, she said she was sent back to face horrific punishments in the impoverished nation. Ji was repatriated three times to North Korea after she was caught in China, before eventually escaping the brutal regime for good when she made it to South Korea in 2007.

According to the Express, Ji is now reunited with her mother and brother, as well as her younger sister – who was trafficked and sold into slavery after a failed escape attempt. But the family has still heard nothing about their father.

Ji described the conditions at one detention center as overly gruesome.  She said that the inmates were regularly starved to death while Kim Jong-Un gorges on expensive imported Swiss cheese and French red wine with no regard for his citizens. It’s obvious Kim hasn’t missed any meals.   She also explained that when the prisoners are fed, they are given raw locusts and skinned frogs and rats as food.

But the most horrific thing the woman witnessed while imprisoned in harsh conditions, was the feeding of corpses to dogs. After prisoners were starved to death, government officials would feed the dead bodies to dogs where other prisoners could see the disturbing display. Ji-Hyeon-A described North Korea as “a terrifying prison and the Kim’s are carrying out a vast massacre and it takes a miracle to survive there.”

Ji also described how North Korean women who got pregnant in China were forced to have abortions. “Pregnant women were forced into harsh labor all day,” she said. “At night, we heard pregnant mothers screaming and babies died without ever being able to see their mothers.”

The third time Ji Hyeon-A got caught and sent back to North Korea she was three months pregnant. She tearfully described how she was forced to have an abortion without medication at a local police station because North Korea has banned mixed-race babies.  “My first child passed away without ever seeing the world,” she said with tears in her eyes, “without any time for me to apologize.”

Ji-Hyeon-A urged the U.N. and leaders worldwide to fight for North Korean defectors, especially those who are repatriated.  She asked China to stop sending North Koreans back to their native country because now they know what goes on once they return.

Earlier in the day, China had attempted to stop the Security Council meeting convened by Japan on the human rights situation in North Korea. China only had the support of Russia and Bolivia and failed in its attempt to stop the meeting from moving forward.