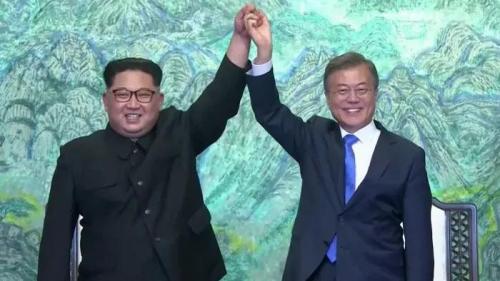 North Korean leader Kim Jong Un and South Korean President Moon Jae-in agreed Friday to finally end a seven-decade war this year, and signed a declaration to pursue the “complete denuclearization” of the Korean Peninsula, although they did not announce any concrete steps to dismantle the North’s nuclear programs.

The two leaders embraced after signing the deal during a historic meeting on their shared border, the first time a North Korean leader has set foot on the southern side. They announced plans to formally declare a resolution to the war and replace 1953 armistice that ended open hostilities into a peace treaty by year’s end.

“We solemnly declare to our 80m Koreans and the world that there will no more war on the Korean peninsula and a new era of peace has begun,” North Korean leader Kim Jong Un and South Korean president Moon Jae-in said in a joint statement. “It is our urgent historic assignment to put an end to this current abnormal state of ceasefire and establish a peace regime.”

“We have agreed to share a firm determination to open a new era in which all Korean people enjoy prosperity and happiness on a peaceful land without wars,” Kim said, in his first remarks in front of the global press since taking power in 2011.

The two sides “confirmed the common goal of realizing, through complete denuclearization, a nuclear-free Korean Peninsula.”

The two agreed to work towards advancing the reunification of the divided nations and further improving inter-Korean relations. In order to reduce tension, the two sides agreed to hold military talks in May and set up a joint liaison office in Kaesong, the border town in the North.

“South and North Korea agreed to actively seek the support and cooperation of the international community for the denuclearization of the Korean Peninsula,” according to the statement. It didn’t elaborate on what that would entail.

“The commitment to ‘complete denuclearization’ is ambiguous, and subject to different interpretations,” said Youngshik Bong, a researcher at Yonsei University’s Institute for North Korean Studies in Seoul. “It can be interpreted as North Korea getting rid of all warheads, or North Korean demands on the U.S. military in South Korea.”

They have also agreed to end any hostile activities that can lead to military clashes, including cross-border propaganda broadcasts and leaflet distribution. They will also enable Red Cross talks to discuss reunions of families separated by the Korean war.

Kim on Friday walked across the military demarcation line dividing the two nations with an aim to end decades of conflict on the peninsula, becoming the first North Korean leader to set foot on South Korean soil.

As Bloomberg notes, the agreement follows a rapid thaw of tensions on the peninsula after a flurry of North Korean missile tests and a hydrogen bomb detonation last year. Kim plans to meet U.S. President Donald Trump soon, which would be the first summit between a North Korean leader and a sitting American president.

The question now is whether the commitment will lead to lasting change. Previous agreements have collapsed over inspections, weapons tests and disputes over economic aid.

Much of the agreement mirrors previous deals between North Korea and Moon’s liberal predecessors. It appeared aimed at restoring cooperation that had deteriorated over the past decade.

Kim’s official Korean Central News Agency issued a tersely worded commentary after the announcement urging the U.S. to respond “with sincerity.” “What is needed for the U.S. is to learn how to observe good manners and how to respect the party concerned, not resorting to high-handed practices and arrogance,” the piece said.

Reaction in markets was limited given the South Korean stock market had closed for the week when the deal was announcement landed.

The meeting paves the way for Mr Kim to meet US President Donald Trump later this year.

“I felt a flood of emotion as I walked the 200 meters here,” Kim told Moon as talks began.

“I came here with a mindset that we will fire a flare at the starting point of a new history for peace and prosperity. Let’s get everything off our minds out here and get good results.”

“Kim Jong-un said that he came here to put an end to the history of conflict, discuss and remove obstacles between us with the South Korean president. He said let’s meet more often and we should be determined not to go back to square one. Kim also said let’s live up to all the expectations and create a better world.”

“The two leaders had a sincere and frank dialogue over the denuclearisation and the establishment of permanent peace of the Korean peninsula and development of inter-Korea ties.”

After they planted the tree, Mr Kim told Mr Moon:

“Just like a pine tree, I hope that we can always be green, even in winter time.”

“Yes, it will be like that,” Mr Moon replied.

“Eyes and ears from all over the world are focused on Panmunjom,” Moon said. “I feel the weight on our shoulders is heavy.”

As The BBC notes, the inter-Korean summit has basically taken everyone by surprise and proven many an expert prediction very wrong (and gravely disappointed many anti-Trump-ites).

Along the way, I've gotten many things wrong. Known and unknown unknowns abound. The capacity to be surprised & questions one's assumptions is a struggle, and the most important one. But blanket skepticism does not guarantee you are getting things right; & fatalism is a dead-end.

But in January, the North embarked on direct talks with Seoul, attended the Winter Olympics in South Korea and in April the two leaders met for a historic inter-Korean summit.

Pyongyang also offered direct talks with the US – an offer Mr Trump accepted – and ordered a halt to nuclear and missile tests.

Talks between the two would be unprecedented, but the details, agenda and timing of the summit are yet to be confirmed.

Of course, as Bloomberg reports, any progress on dismantling the Kim’s weapons program would likely be slow and fraught, and involve visits by international inspectors. Prior efforts involving Kim’s late father when he was leader collapsed in acrimony, with North Korea blaming the U.S. for failure to adhere to the agreements.

“It’s off to a good start, but there must be a concrete commitment by Kim on denuclearization,” said Youngshik Bong, a researcher at Yonsei University’s Institute for North Korean Studies in Seoul. “Otherwise it will end up as a fancy show.”