Domestically, major strife and internal division often end in revolutions and major paradigm shifts. On the international scene, there is no such thing as revolution; there are ONLY WARS.

Looking at the United States and the path it took, it seems more like a corporation than a country. Think about this sentence – America produces wealth, but doesn’t focus on the country’s financial health – its market boom, its government bankrupt.

I want to show you a BIG-PICTURE, bird’s-eye view of the history of the world’s largest economy from inception to present day and then explain why the path out of this problem IS TRICKY. Unlike many crises before, it doesn’t seem like anyone has said the SAFE WORD YET.

Let’s follow the BLUE and RED lines first since we view these as the catalysts for how the other categories have developed over time.

In the beginning, nothing prepared the world for the fact that the United States, comprised of just the colonies, would one day become 25% of global GDP activity.

This is a financial miracle, but who is gaining and who is at a DISADVANTAGE?

The blue line shows that the defiant ones, those early pilgrims, adventurers, and pioneers who sought to live in the land of the free, didn’t RELY ON ANYTHING external and were thirsty for education.

Starting in 1760 and running through the formation of the country in 1776, education BOOMED.

Remember, the people that began migrating here in the 1600s were the poorest bunch of them all, 97% of them illiterates and from violent, feudal backgrounds – those with NOTHING TO LOSE, for the most part.

They were willing to risk their lives traversing the Atlantic Ocean just to reach no man’s land, a journey that took months and resulted in many casualties.

I get excited just thinking about the entrepreneurial aspect of it. These were SPECIAL men and women who came to the “new world.”

There’s no denying that education PEAKED around 1870 and that in the past 150 years, compared to its own history, most Americans are VERY IGNORANT, while a relative few are INCREDIBLY WELL-EDUCATED, so much so that they are able, via technology and other means, TO OFFSET the collective lack of thirst for knowledge, education, and IQ. The gap between those that have access to the most in-depth perspectives have an UNFAIR ADVANTAGE over the masses.

Roughly 40% of children living in poverty aren’t prepared for primary schooling. By the age of 10, African-American/Hispanic or pupils of low-income backgrounds read and write like 8-year-olds. By graduation, their level is only that of the 8th grade.

Notice in the chart that while education PEAKED in the late 1870s and has since been in FREE-FALL, technology continued to be the STRONGEST TREND of American capitalism.

It helped the country build the biggest military in human history, gain control of the reserve currency system, and become a financial center, but it also made the country less competitive and rely less on trade, resulting in LESSENED OUTPUT. 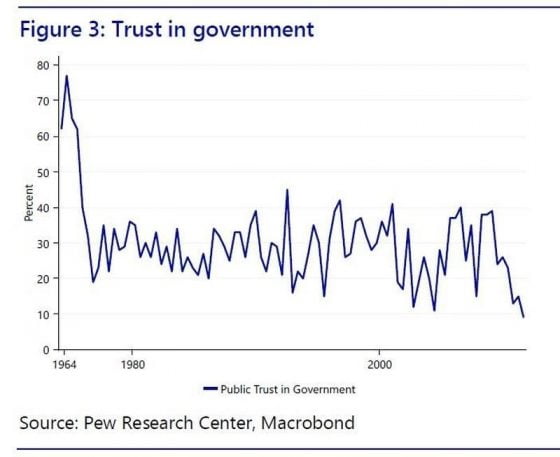 We can VISIBLY SEE how, in the 1960s, following the murder of JFK, MLK, and the entrance into the Vietnam War, the public had a “MOMENT OF TRUTH” and decided the government had become TOO BIG and too corrupt.

In a way, Kennedy was the last great president that the public wholeheartedly embraced.

Go back to the top of the chart and you can see that the reserve currency status peaked in September 2001, following the 9/11 attacks.

Also, notice how 2008 marked the top for technological innovation, as China and India began to TAKE AWAY from America’s perfect track record.

I don’t want to say that it’s all downhill from here, but it SURE LOOKS LIKE IT based on hard data.