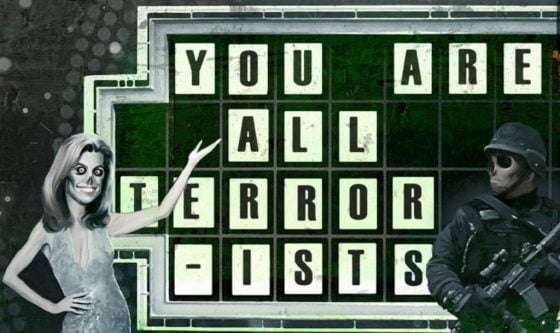 This article was originally published by Nicholas West at Activist Post.

(Note: In light of the latest domestic terror events it will be worth listening closely to the dominant narrative that emerges. It is being reported that 21-year-old Patrick Crusius is in custody for the Texas shooting, while the Ohio shooter appears to have been killed by police. Activist Post contributor Vin Armani posted a tweet from a witness in El Paso who claims to have seen more than one shooter. It will be interesting to see if this can be corroborated by others. Our thoughts go out to the victims and all who have been affected by these tragedies.)

Adriana and her two children were inside near the cash register when the shooting started. She says she saw 3 or 4 men in black as shooters. https://t.co/46Z5utWmE2

It already has been well documented how many government agencies have compiled lists containing Americans who are potential terrorists.

Back in 2013, Michael Snyder highlighted 72 types of Americans who made some sort of “potential threat” list and he provided links to all of the documents.

As comprehensive as that was, there is a brand new document that has been obtained by Yahoo! News which purports to illustrate a new category that the FBI is zeroing in on — “fringe” conspiracy theories.  Yahoo! states that this is a “first for the agency.”

The document specifically mentions QAnon, a shadowy network that believes in a deep state conspiracy against President Trump, and Pizzagate, the theory that a pedophile ring including Clinton associates was being run out of the basement of a Washington, D.C., pizza restaurant (which didn’t actually have a basement).

We already know that nearly everyone who questions just about anything can land on one of these lists, so the fact that they are singling out QAnon and Pizzagate should come as no surprise. Instead, it’s more likely that the real impact is highlighted in the following paragraph.

“The FBI assesses these conspiracy theories very likely will emerge, spread, and evolve in the modern information marketplace, occasionally driving both groups and individual extremists to carry out criminal or violent acts,” the document states. It also goes on to say the FBI believes conspiracy theory-driven extremists are likely to increase during the 2020 presidential election cycle.

“The advent of the Internet and social media has enabled promoters of conspiracy theories to produce and share greater volumes of material via online platforms that larger audiences of consumers can quickly and easily access,” the document says.

It is interesting that Yahoo! also highlights a statement from the FBI where they say they can “never initiate an investigation based solely on First Amendment-protected activity. As with all of our investigations, the FBI can never monitor a website or a social media platform without probable cause,” adding:

Though the FBI document focuses on ideological motivations, FBI Director Wray, in his testimony last week, asserted that the FBI is concerned only with violence, not people’s beliefs.

This would seem to conflict with a recent report from Nextgov that couldn’t be clearer when it states, “FBI Wants Tech to Track Social Media for Criminals and Terrorists Before They Act.”

The Federal Bureau of Investigations aims to acquire access to a “social media early alerting tool” that will help insiders proactively and reactively monitor how terrorist groups, foreign intelligence services, criminal organizations and other domestic threats use networking platforms to further their illegal efforts, according to a request for proposal amended this week.

“With increased use of social media platforms by subjects of current FBI investigations and individuals that pose a threat to the United States, it is critical to obtain a service which will allow the FBI to identify relevant information from Twitter, Facebook, Instagram, and other Social media platforms in a timely fashion,” the agency said in the RFP. “Consequently, the FBI needs near real-time access to a full range of social media exchanges in order to obtain the most current information available in furtherance of its law enforcement and intelligence missions.”

All of this comes at a time where Big Tech is purging independent media and, themselves, seem to be expanding their definition of dangerous language and potential deadly topics that are a threat to society.  Apparently, they’ve now been given further marching orders.

You can find the full 15-page document at HERE.