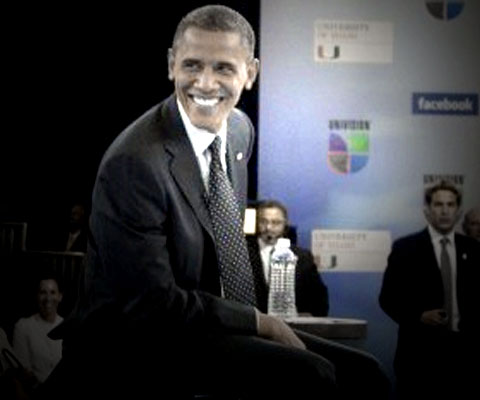 But is this tide turning presidential address scheduled to be carried live on TV for all the country to witness?

No. It seems that the big four networks – ABC, NBC, CBS and Fox – have all opted out of broadcasting the 15 minute speech, instead airing their November sweeps shows as scheduled in hopes of maximizing viewer ratings:

The administration announced today that POTUS will be speaking live from the White House at 8 PM ET on Thursday. ABC has the fall finale for Grey’s Anatomy on at that time while CBS has ratings powerhouse  The Big Bang Theory, NBC has reality show The Biggest Loser and Fox has Bones. As of right now, three of those networks will not see any changes in their November sweep schedules due to the speech.

While Obama’s speech will be seen on their cable news siblings, Fox and NBC  are not carrying it live on their broadcast networks tomorrow night.

Out of sight, out of mind?

Moreover, according to Deadline.com, the White House never asked the networks to carry the address:

The broadcast networks were not asked for time by the administration, sources tell me.

Wow! Sounds more like a blackout than a snub. While the cable networks, watched by news junkies, will carry the speech, the heartland of America will have drama, dancing and entertainment on their minds rather than the astounding wholesale immigration amnesty implemented unilaterally by the president – outside of Congress – through the stroke of his executive order pen. As SHTF previously reported, Obama will, specifically, reassign more than 12,000 immigration agents to other duties and shield resident immigrants residing in the country from deportation.

But, curiously, there are two regular TV networks with massive viewing audiences who will be broadcasting the speech LIVE despite hosting similar big TV award shows (which will be interrupted)…

They also happen to have the largest broadcast Hispanic and Spanish-speaking audiences:

Univision Network will air the POTUS announcement regarding Executive Action on Immigration live tomorrow. We will proceed with our coverage plans for the Latin GRAMMY’s, immediately following the President’s remarks. Complete coverage of the announcement, reactions and what it means for the US will  be covered across Univision’s news platforms, as well as on the Network’s “Despierta America” morning show.

Fellow Spanish language network Telemundo will also be showing the President’s speech live with reaction and analysis to follow at least until 9 PM.

There is absolutely no question here as to why Univision and Telemundo would find Obama’s speech so broadcast worthy, while the other major stations are keeping with the regularly scheduled program.

Nothing to see here, no skyrocketing costs for health care, education, food stamps and social programs. Move along… the season finales are starting soon.