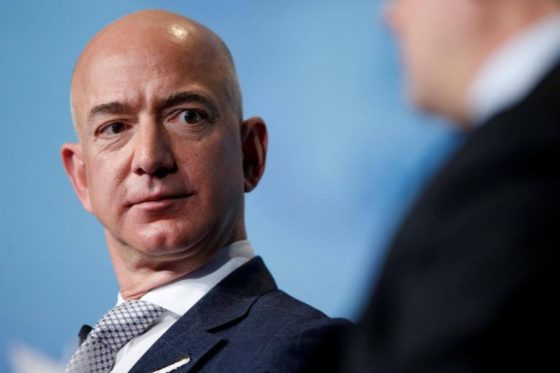 Update: American Media International – the parent of The National Enquirer – has responded to Bezos’ accusations with a brief statement:

“American Media believes fervently that it acted lawfully in the reporting of the story of Mr. Bezos.

Further, at the time of the recent allegations made by Mr. Bezos, it was in good faith negotiations to resolve all matters with him.

Nonetheless, in light of the nature of the allegations published by Mr. Bezos, the Board has convened and determined that it should promptly and thoroughly investigate the claims.

Upon completion of that investigation, the Board will take whatever appropriate action is necessary.”

As we detailed earlier, with the world suddenly transfixed by the leaked Jeff Bezos text and “dick-pic” drama, which overnight the world’s richest man (at least until his soon to be ex-wife pockets half his equity stake in Amazon) revealed were used in an extortion attempt by the National Enquirer, a Washington Post reporter said that the investigator hired by the Amazon CEO, Gavin de Becker, believes that text messages leaked to the National Enquirer between Bezos and his girlfriend may have been sent to the magazine by someone in government.

“They have begun to believe, the Bezos camp, that this publication by the National Enquirer might have been politically motivated,” Roig-Franzia said Thursday.

“Gavin de Becker told us that he does not believe that Jeff Bezos’s phone was hacked, he thinks it’s possible that a government entity might have gotten hold of his text messages,” he added, strongly hinting that the administration may have been instrumental in the leak of the embarrassing text messages.

Washington Posts @RoigFranzia says Bezos' team thinks it's possible that the text leaks were politically motivated and that a "government entity" accessed the Bezos texts and hoo boy that's certainly something pic.twitter.com/MQuzNFbCed

As The Hill notes, De Becker’s assertion that Bezos’s phone was not hacked “raises questions as to how staffers at the Enquirer obtained messages that were allegedly sent privately between Bezos and his rumored girlfriend, former TV anchor Lauren Sanchez.”

Bezos and Trump have feuded publicly over Amazon and its relationship with the federal government, as well as over Bezos’s ownership of The Washington Post, which the president says unfairly targets him with negative news coverage. Should it be confirmed that the government in general, or the administration in particular, facilitated the leak, it will promptly escalate the simmering cold war between the world’s richest and world’s most powerful man to a nuclear state.

As a reminder, in a Medium post Thursday night the Amazon CEO said that the Enquirer was attempting to force him to call off his investigation of the tabloid under the threat of further texts being released. The Enquirer is owned by David Pecker, a top ally of President Trump. Pecker has been accused of helping the president kill unfavorable stories about his past affairs during the 2016 election.

Bezos vowed not to fall for “extortion” tactics from Pecker and American Media Inc. which owns the Enquirer. “Rather than capitulate to extortion and blackmail, I’ve decided to publish exactly what [American Media Inc. (AMI)] sent me, despite the personal cost and embarrassment they threaten,” Bezos wrote.