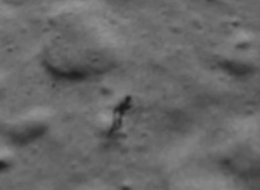 Though NASA has yet to respond to inquiries about what the figure might be, UFO researchers suggest (as you might have guessed) that it could be some sort of alien creature.

Wowforreel said he started investigating the shadow after receiving an online tip from another web user named Jasenko.

‘An irregularly shaped dark spot he noticed on Google Moon looks like it could be a cast shadow from a massive standing object, or figure,’ Wowforreeel told UFO Sighting Daily.

‘At first I thought maybe it was something drawn into the picture but after going to Google Moon, whatever it is or isn’t…uh, is there.’

Here’s a close up of the image: 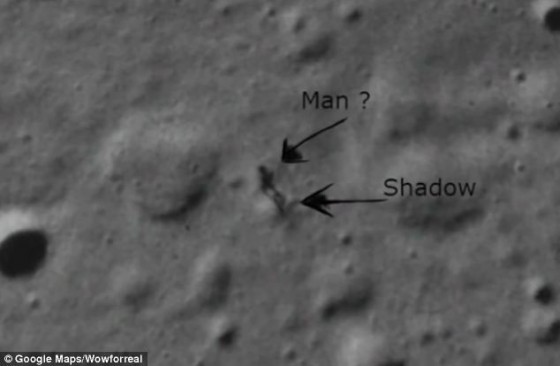 On its face, the “figure” looks like a shadow created by any number of geological formations on the moon’s surface.

But as these things go, the Internet is pointing to aliens and an ancient statue from Greece as the true subjects of the photos. The Examiner even urges its readers to set aside all logic before examining the mysterious shape:

Of course, the shadow might be explained in a number of ways, particularly as a trick of light or a camera lens glitch.

But, if those explanations are ruled out, it still leaves the question of what this object is, since it appears to be rising a great distance from the surface of the Moon.

But, this isn’t the only photo of something mysterious on the moon. Researchers have found all sorts of objects on Earth’s natural satellite, but the following one might also raise some eyebrows as it purports to show what could potentially be a moon base or some sort of unidentified craft.

Here’s a picture of the supposed base or craft:

‘Is it just a weird looking crater? or is it something else?,’ he asked.

‘It is really there, not faked and I have no clue what it is. I found nothing else like it in any of the other craters.’

According to website Tech and Gadget News: ‘The gigantic shape actually looks like the leading edge of an immense, triangular space ship, similar to, so far, super secret stealth aircraft technology, but is much larger than any airplane ever built on Earth.

‘The regularly spaced, circular promontory shapes which make up the seven points on the perfectly formed triangle wedge seem to be intelligently designed.

What’s most interesting about the above photo is that the triangular light structure has an uncanny resemblance to the Phoenix Lights phenomenon witnessed by thousands of people on March 13, 1997: 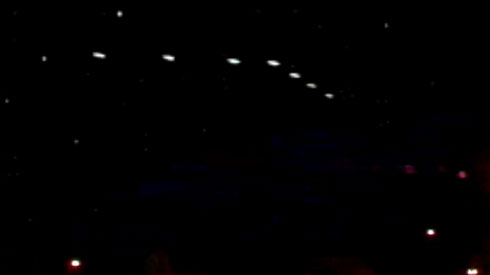 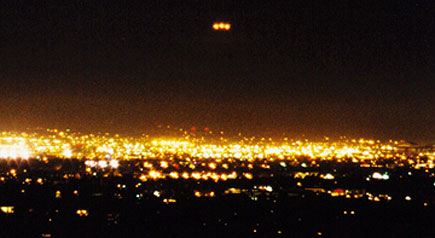 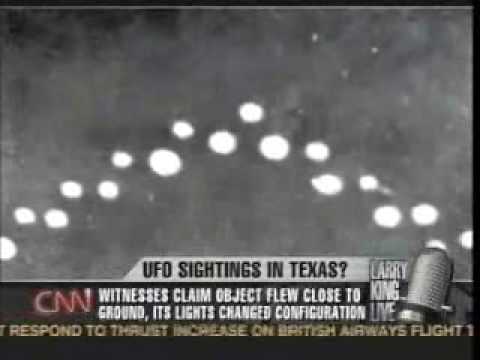 Could the latest ‘Shadow Man’ snapshot captured on the moon be an inhabitant of the Phoenix Lights craft?

Or, is the Shadow Man just an odd shaped rock that so happened to be photographed at just the right time so as to make it resemble a humanoid shaped figure?

Or, is it possible that this is no alien or rock, but rather, a secret Space Program that has left not just advanced crafts on the moon, but people to operate them?

Could be something. Could be nothing. We’ll leave it for you to decide.