MSM: Seniors Should Get An Extra-Strength Flu Shot This Year 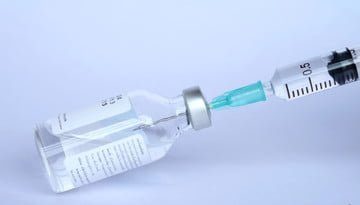 The five COVID shots older people are being urged to get aren’t enough to satisfy those who want complete control over humanity.  The mainstream media and ruling class also want seniors to get injected with an “extra-strength” flu shot.

Doctors and health “experts” already know that people have reached their limit when comes to getting injected with experimental drugs. But their message for vaccine-weary Americans: Don’t skip your flu shot this fall and seniors, ask for a special extra-strength kind.

After the flu hit historically low levels during the COVID-19 pandemic, it may be poised for a comeback, reported PBS. Anyone who has been paying attention knows why the flu disappeared once COVID hit.

According to the Centers for Disease Control and Prevention, annual flu shots are recommended starting with 6-month-old babies. Flu is most dangerous for people 65 and older, young children, pregnant women, and people with certain health problems including heart and lung diseases.

Here are your three choices:

There are three choices. Fluzone High-Dose and Flublok each contain higher doses of the main anti-flu ingredient. The other option is Fluad Adjuvanted, which has a regular dosage but contains a special ingredient that helps boost people’s immune response. -PBS

And what is this “special ingredient?” Mainstream media isn’t saying, so that could say it all. So what if those “senior targeted vaccines” are all out at a local pharmacy? Just get anything!

If a location is out of senior-targeted doses, it’s better to get a standard flu shot than to skip vaccination, according to the Centers for Disease Control and Prevention.

All flu vaccines in the U.S. — including types for people younger than 65 — are “quadrivalent,” meaning they guard against four different flu strains. Younger people have choices, too, including shots for those with egg allergies and a nasal spray version called FluMist. -PBS

The vaccine propaganda has only just begun. With new variants and the monkeypox out there, this isn’t going to get better any time soon either. At least the ruling class’s mouthpiece is admitting that people are getting “vaccine wary.”

People are just tired of being pincushions for the state.