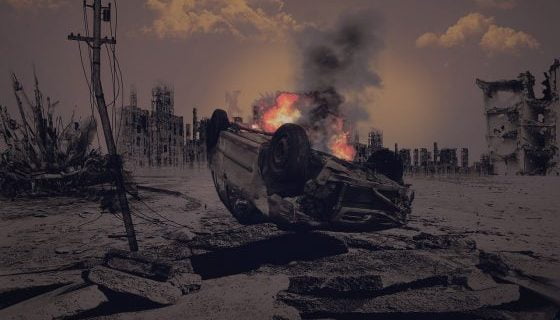 Tensions have been running high in Brooklyn Center, Minnesota, after police shot an unarmed man during a traffic stop, reportedly over an air freshener. The incident has sparked protests that descended into violence.

Police shootings are completely out of hand in “the land of the free,” but burning, looting, and destruction of the property of those who had nothing to do with this murder are also out of hand. Remember:

The mother of Daunte Wright speaks on what happened to her 20 year old son this afternoon in Brooklyn Center, MN. pic.twitter.com/Kcepf3mGml

The rightful response when a person doing the bidding of the ruling class murders someone is anger. But resorting to violence of any kind is still not going to solve the problem or bring back the slain.

“All he did was have air fresheners in the car and they told him to get out of the car,” Katied Wright said.

It’s illegal for drivers to hang items from the rearview mirror that may obstruct the view of the road.

According to police, the officers who stopped Wright’s car “determined that the driver of the vehicle had an outstanding warrant,” and sought to take him into custody. It’s unclear what transpired next, with police saying that Wright “re-entered the vehicle,” which prompted one of the officers to open fire.

Wright then drove “several blocks before striking another vehicle,” and was pronounced dead at the scene, while a woman in the passenger seat was injured in the crash and was taken to the hospital with non-life-threatening injuries.

Daunte’s mother said her son was heading to a car wash when he was pulled over. She also accused police of leaving her son’s body lying at the scene for hours. -RT

In the Brooklyn Center neighborhood of Minneapolis, police have killed 20 year old #DaunteWright. Angry neighbors have descended in the scene, smashing a police cruiser as armored officers stand nearby. pic.twitter.com/S05Kl9aVuV

Protesters chanted Wright’s name, ignoring the orders of riot police to back off, and faced off with the officers standing guard at police headquarters.

HAPPENING NOW outside the Brooklyn Center police station – a large crowd has formed after the police shooting of a 20-year-old man earlier today. – Police in riot gear have used gas and rubber bullets to try and clear the crowd. More info here: https://t.co/qeuNrRn64O pic.twitter.com/ARK3Rs3g5g

Unfortunately, the protests are not solely against the rulers who use the police to kill others. They have been marred by widespread looting as others use this as an excuse to take from others, and steal the fruits of other’s labor. It’s wrong when the government does it and it’s wrong when the public does it. Theft, including taxation, should never be tolerated if we seek a civil society.  Footage shows looters ransacking a footwear store. They also reportedly broke into a Walmart.

Minneapolis @cvspharmacy and others stores nearby are now being targeted and looted .this all in response to killing of #dauntewright by Brooklyn center police off pic.twitter.com/zpKGaKvrhC

The police are investigating themselves right now.