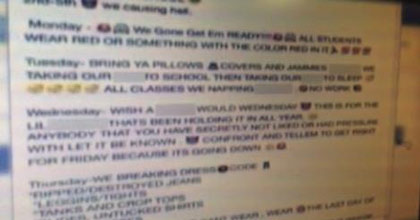 Editor’s Note: Government sponsored entities are increasingly working to redefine the English language. As noted in the article below by Paul Joseph Watson of Infowars, “terroristic threats” now include everything from pointing your fingers in the shape of a gun to simply disagreeing with school dress code policies. Even sharing or ‘Liking” a particular post or comment via a social network can now land you in hot water with the establishment. Our children are being taught that any form of disagreement with the status quo is related to terrorism, a fear tactic designed to quell dissent. From where we’re standing this is nothing short of brainwashing on a mass scale.

Two dozen Spalding County middle school students were suspended after a Facebook post which encouraged classmates to break the dress code was characterized as a “terroristic threat” by the principle.

The post asked other students at Cowan Road Middle School to flout the rules for the final week of term by wearing red on Monday. Despite the fact that most of the students simply shared or commented on the Facebook post and didn’t actually break the dress code, they were suspended anyway.

“And (the principal) was like, ‘OK, you’re a threat to our school,’ and then she suspended me,” a 7th grade student told WSB-TV.

“To me it was just a bunch of 13-year-olds acting crazy,” said Christopher Cagle, the father of a suspended honor roll student, who added that the principle did not inform any of the parents before suspending the students, while labeling their actions a “terroristic threat.”

The students now face a tribunal to decide if any further disciplinary action will be taken.

The story again highlights how schools across America are increasingly adopting zero tolerance policies in response to any kind of dissent as educational establishments begin to resemble prisons to a greater and greater degree.

Last month we reported on the case of a middle school student in Portland, Ore. who was not only suspended but had the cops called on him by the principle after doodling a picture of a man hanging.