Meryl Streep, Who Covered Up For Harvey Weinstein And Once Called Him GOD, Is Now Attacking The Trump Family For Being “Silent” On Sexual Assault 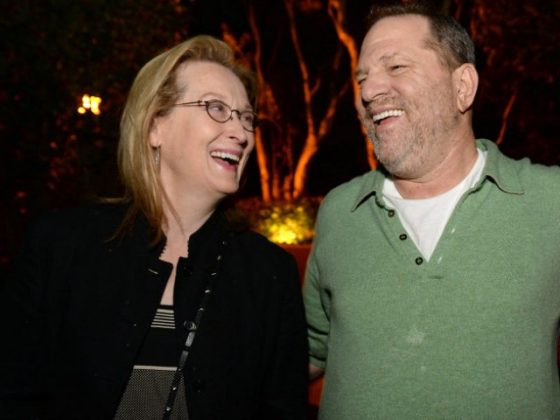 In the most stunning example of hypocrisy seen in some time, Hollywood liberal Meryl Streep is now attacking both Melania and Ivanka Trump for being “silent” on the issue of sexual assault.

Yes, you read that right. The women who worked with Harvey Weinstein for 20 years and even once called him “god” is now attacking the Trump family for not publicly discussing allegations against Donald Trump when Streep herself literally ignored Weinstein’s disgusting behavior for over a decade while winning numerous Oscars for her work with him.

Streep made the pathetic comments in a wide-ranging interview with The New York Times in which she discussed her new movie before being asked about her initial silence after the Weinstein allegations were revealed.

“I’ve got to shift conversation to the news these days, sexual harassment. One thing that struck me after the Harvey Weinstein accusations broke was people were saying, “What is Meryl going to say?” They were waiting for you,” The Times Cara Buckley asked.

Streep answered the question by laughably claiming that she only heard about the allegations the Friday they were released (instead of over the 20 plus years she worked with him) before then blaming her lack of social media accounts for staying silent after Weinstein’s behavior was revealed to the world.

“I know. I found out about this on a Friday and went home deep into my own life. And then somebody told me that on “Morning Joe” they were screaming that I haven’t responded yet. I don’t have a Twitter thing or – handle, whatever. And I don’t have Facebook. I really had to think. Because it really underlined my own sense of cluelessness, and also how evil, deeply evil, and duplicitous, a person he was, yet such a champion of really great work,” Streep claimed.

“You make movies. You think you know everything about everybody. So much gossip. You don’t know anything. People are so inscrutable on a certain level. And it’s a shock. Some of my favorite people have been brought down by this, and he’s not one of them.”

Amazingly, Streep took her nonsense even further, going on to claim that people shouldn’t be talking about her stunning silence but rather should be focusing on the Trump family.

That’s right, Streep doesn’t wanna hear about her covering up for Weinstein for years and by golly liberal “icons” get their way! Plus it has to be Trump or his families fault anyway!

The entire interview is truly a test case in Hollywood liberal insanity and just goes to prove that those in Hollywood truly believe they can get away with anything as long as they somehow connect it to Donald Trump.

Merle Streep on Trump: “Evil prospers when good men do nothing” … Like she did for 20 years, winning Oscars. pic.twitter.com/6EutGqeDe6