Merry Christmas: May the Spirit of the American Stand in Bastogne Be With You All 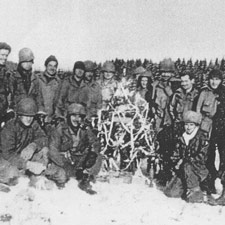 The current world situation is grim, and the predilection of the results seems to sway heavily in favor of the ruling elites, those nabobs who are ruthlessly trying to dominate and enslave us.  In no other time in history has the fate of the known world been absolutely at the brink of precipices human.  Akin to Eloi and Morlocks in the film, “The Time Machine,” we are heading toward two separate destinies…the enslaved and the enslavers.  Never before has the technology existed to destroy the world and the technology to create virtually unlimited surveillance, to the purpose of dominating the world.

The dominance is far more, however; far greater than can be measured in simple geography or one singular culture.  The paradigm seems to be leaning toward the dystopia outlined in Orwell’s “1984,” with the creation of three super-states and a contested piece of territory that also served to justify the complete social order and economy of the three states: property that was never truly controlled.

We are even beyond that, now, with the rise of the drones and the mapping technology to be able to see a dime in the Amazon jungle with the cameras and satellites that exist.  We have been censused with GPS’s, the newer cars have the “black box” to record data, the NSA built that monolithic data collection center to record e-mails and telephone calls, there are cameras on every intersection recording with facial recognition software and license plate identifiers.

By all indicators, we’re standing upon that precipice looking into the abyss of the next dark ages… with “dark” better describing the character and lack of humanity of the coming world systemic collapse.  The darkness referring to the character of men’s hearts, not a lack of technology.  Just as in “1984” our technology is not meant to serve men and make it easier on mankind: it is meant to keep us corralled and under control, with the advances in technology that do improve human life and conditions being reserved for the elites.  A film that characterized this type of society was “Elysium,” where the planet Earth was basically a fourth-world garbage heap, and the oligarchs and controllers lived in an aseptic, controlled, orbiting “world,” free of the ravages of the savages: the ultimate “gated” community.

So, with all of this doom and gloom, you may ask, what is the point of the article?  Well, those facts were merely meant to elucidate the current state.

But that is not the purpose of the article.  The meaning I wish to share with all of you, believe it or not, is our basics, our fundamentals, and an ongoing salute that I give to you.  This is a time for reflection, a time of family, and you, the Readers, have superb comments and outstanding input.  I learn and glean much information from you, and for that I’m grateful.

You are the heart of the United States, and what is left of it.  I give you this, that you may remember:

1944, and the world was at war; the end was drawing nearer with fierce fighting in the Battle of the Bulge.  In a town surrounded by the German forces called Bastogne, a General by the name of Anthony C. McAuliffe told the German commander that we wouldn’t give in.  You know the details and the results: the fierce fighting for every inch of ground, and the average GI Joe to face the best the Wehrmacht and the SS had to offer.  Once again: citizen-soldiers, sent away from home to fight in a war that would determine the future of the world.

I found this photo that I believe summarizes it all more than words can say: 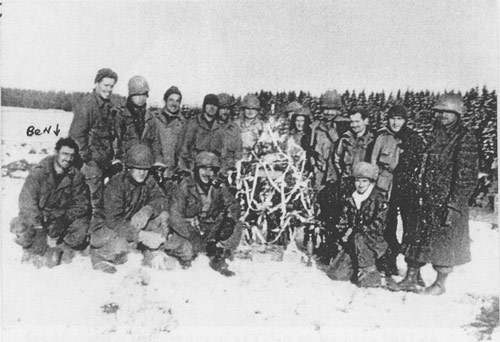 That was “us” then: the can-do spirit that enabled average guys that cared for one another to do the things that define moments of greatness.  And here they were, with all of the destruction raging around them, with a Christmas tree, and more importantly, with each other.

I wish to say that we face such challenging times again.  We do not know when it will all happen, or the exact manner, but if we stand firm with one another, try our best to do the right thing, and believe in each other and in God, perhaps He will see us through it all.  May the spirit of the American stand in Bastogne be with all of you in these trying times.  May your families all enjoy light, and life, and the spirit of togetherness and caring.  May your holidays and Christmas season bring you and your families closer.  May you prosper in all you do.  May you stay strong, and determined to keep giving your input, keep preparing, and above all, never lose faith in yourselves and in God.

So Merry Christmas to you: to the Readers, my fellow Americans!  May God bless and protect you and your families in all that you do.  Stay frosty and keep up the good fight.