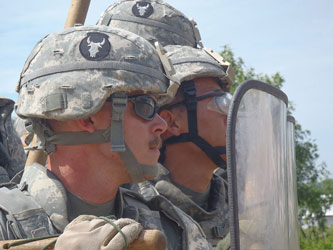 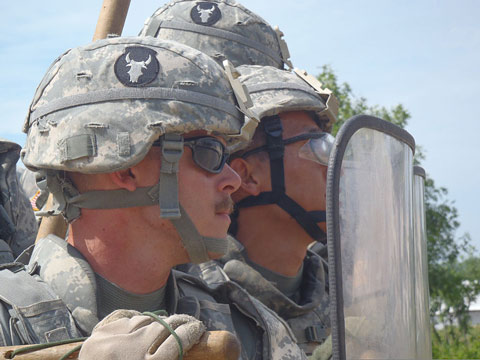 About a month ago we showed photos of the Chinese police engaged in a drill designed to crush a “working class insurrection”, in which the police did precisely what would be required to end a middle class rebellion. It made us wonder: what does China know that the US doesn’t. As it turns out, nothing.

Because long before China was practicing counter-riot ops using rubber bullets, all the way back in 2008 the US Department of Defense was conducting studies on the dynamics of civil unrest, and how the US military might best respond. The name of the project: “Minerva Research Initiative” and its role is to ” “improve DoD’s basic understanding of the social, cultural, behavioral and political forces that shape regions of the world of strategic importance to the U.S.”

The Guardian which first revealed the details, reports that, “The multi-million dollar programme is designed to develop immediate and long-term “warfighter-relevant insights” for senior officials and decision makers in “the defense policy community,” and to inform policy implemented by “combatant commands.”

The premise behind Minerva is simple: study how violent political overthrow, aka mass civil breakdown, happens in the day and age of social networks, and be prepared to counteract it – by “targeting peaceful activities and protest movements” – when it finally reaches US shores.

Among the projects awarded for the period 2014-2017 is a Cornell University-led study managed by the US Air Force Office of Scientific Research which aims to develop an empirical model “of the dynamics of social movement mobilisation and contagions.” The project will determine “the critical mass (tipping point)” of social contagians by studying their “digital traces” in the cases of “the 2011 Egyptian revolution, the 2011 Russian Duma elections, the 2012 Nigerian fuel subsidy crisis and the 2013 Gazi park protests in Turkey.”

Twitter posts and conversations will be examined “to identify individuals mobilised in a social contagion and when they become mobilised.”

Another project awarded this year to the University of Washington “seeks to uncover the conditions under which political movements aimed at large-scale political and economic change originate,” along with their “characteristics and consequences.” The project, managed by the US Army Research Office, focuses on “large-scale movements involving more than 1,000 participants in enduring activity,” and will cover 58 countries in total.

Minerva is well funded: From the outset, the Minerva programme was slated to provide over $75 million over five years for social and behavioural science research. This year alone it has been allocated a total budget of $17.8 million by US Congress.

Among the purely “theoretical” recent studies Minerva is funding is a University of Maryland project in collaboration with the US Department of Energy’s Pacific Northwest National Laboratory to gauge the risk of civil unrest due to climate change. The three-year $1.9 million project is developing models to anticipate what could happen to societies under a range of potential climate change scenarios.

But what is most disturbing is that since the pretext for Minerva is simply to conduct theoretical social science experiments, there should be zero practical uses of the knowledge gleaned. Well, no.

Although Office of Naval Research supervisor Dr Harold Hawkins had assured the university researchers at the outset that the project was merely “a basic research effort, so we shouldn’t be concerned about doing applied stuff”, the meeting in fact showed that DoD is looking to “feed results” into “applications,” Corman said in the email. He advised his researchers to “think about shaping results, reports, etc., so they [DoD] can clearly see their application for tools that can be taken to the field.”

Many independent scholars are critical of what they see as the US government’s efforts to militarise social science in the service of war. In May 2008, the American Anthropological Association (AAA) wrote to the US government noting that the Pentagon lacks “the kind of infrastructure for evaluating anthropological [and other social science] research” in a way that involves “rigorous, balanced and objective peer review”, calling for such research to be managed instead by civilian agencies like the National Science Foundation (NSF).

And tying it all together, is – who else – the NSA.

One war-game, said Price, involved environmental activists protesting pollution from a coal-fired plant near Missouri, some of whom were members of the well-known environmental NGO Sierra Club. Participants were tasked to “identify those who were ‘problem-solvers’ and those who were ‘problem-causers,’ and the rest of the population whom would be the target of the information operations to move their Center of Gravity toward that set of viewpoints and values which was the ‘desired end-state’ of the military’s strategy.”

Such war-games are consistent with a raft of Pentagon planning documents which suggest that National Security Agency (NSA) mass surveillance is partially motivated to prepare for the destabilising impact of coming environmental, energy and economic shocks.

As the Guardian’s Nafeez Ahmed concludes, “Minerva is a prime example of the deeply narrow-minded and self-defeating nature of military ideology. Worse still, the unwillingness of DoD officials to answer the most basic questions is symptomatic of a simple fact – in their unswerving mission to defend an increasingly unpopular global system serving the interests of a tiny minority, security agencies have no qualms about painting the rest of us as potential terrorists.”

We wonder: why is that surprising – by the time the “mass civil breakdown” is set to take place (and grand central-planning experiments by the Fed and its peers will merely accelerate said T-zero Day), virtually everyone who poses even the tiniest threat to the collapsing regime will be branded a terrorist.

Since as we reported previously, yet another current version of what previously was merely science fiction, namely the arrival of pre-crime, or where a big data NSA “pre-cog” computer will determine who is a future terrorist threat merely based on behavioral signals, is just around the corner too, it is simply a matter of time before men in gray suits or better yet – drones – quietly arrest any and all potentially threatening social network “nodes” of future terrorist behavior on the simple grounds that their mere presence threatens the status quo with an even faster collapse.

And now, just ignore all of the above, and keep buying stocks, because all is well: these most certainly aren’t the droids you are looking for.