Meet “The Guardian” – Maybe The Scariest-Looking Robot Yet 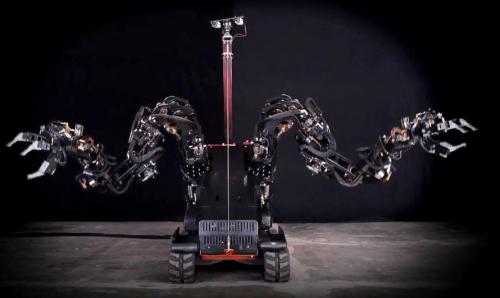 Sarcos Robotics’ Guardian GT has earned comparisons from Wired to Sigourney Weaver’s Power Loader – the machine she used to defeat the eponymous Alien from the 1979 film: It’s a robot that allows people to lift and manipulate objects weighing up to 500 pounds with its 7-foot robotic arms.

While mimicking human dexterity has become one of the defining problems of robotics, the Guardian GT has a couple of advantages that make it more dexterous than its contemporaries: For example, the Guardian GT’s control systems are kinematically equivalent to the human body. This allows the operator to control what’s effectively a larger version of his or her own torso and arms.

The Guardian also employs force feedback so the operator can feel through the machine’s hands. This creates a strange sensation when the operator is lifting a large object, like say a 1,000-pound pipe.

“That’s a little disorienting, so we give a little bit of load into the arm,” Wolff says. Meaning, the robot pushes back a tiny bit. “So instead of lifting a thousand pounds you feel like you’re lifting five.” (How it’s able to do this without the herky-jerkiness of other robots comes down to special actuators, the bits that move and bend the arms. What exactly is special about them, Wolff declines to say, because he’s a good businessman.)

Its designers are marketing the robot for use on construction sites. They argue that the machine would free up workers to handle jobs that require human coordination, while the Guardian does the heavy lifting.

Just imagine this thing on a construction site. Doing something like lifting and joining two pipes would require a crane and maybe five or six workers, who would be freed up to do other jobs that require a more human touch (fine manipulation, for instance). With the Guardian GT, all it takes is one supercharged human. It still requires a lot of coordination, sure, but the robot takes the strain out of the equation.

What’s interesting about this workplace robot is that it’s collaborative—a human is always in control. And that’s what the future of work looks like, especially heavy industry. Fields like construction and agriculture are already facing severe labor shortages, and the machines are poised to pick up the slack. Think automated construction tractors and robots that help humans harvest crops without all the stooping. In the very near future we’ll be working alongside robots, as opposed to robots outright replacing us.

Still, the company insists that robots won’t replace human workers so much as humans will eventually learn to work alongside their robot partners. Robots, which won’t be able to match human dexterity for years to come, just won’t be able to do some tasks that require a high degree of finesse.

“While I think that we will see increasing amounts of autonomy and AI,” says Wolff, “I think the real role in work generally is for us to find as humans how to maximize the utility of robots. Allow them to do what they’re really good at while still relying on what humans are best at, which is wisdom and judgment.”

Then there are the jobs that humans simply can’t do. Because the Guardian GT rolls on either tracks or wheels, the operator can drive it into danger. Think exploring toxic environments and decommissioning nuclear power plants. With the inherent dexterity of the machine, it could easily manipulate things made for humans hands, like valves and buttons.

Indeed, the death of human labor has been greatly exaggerated. For now, at least.