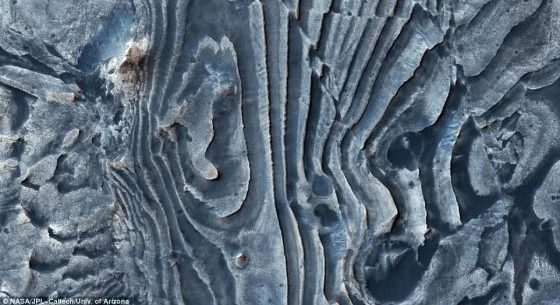 An image released by NASA revealing a strange and distorted landscape on the surface of Mars is being dubbed a “matrix glitch.”  The odd image taken by the Mars Reconnaissance Orbiter shows intriguing clean breaks in the planet’s surface deposits.

The new view shows the different effects of fault activity on the Martian surface, giving rise to everything from clean breaks to ‘stretched out’ distortions.  This is likely an indication that the faults formed at different times when the layers were at various stages of hardening. 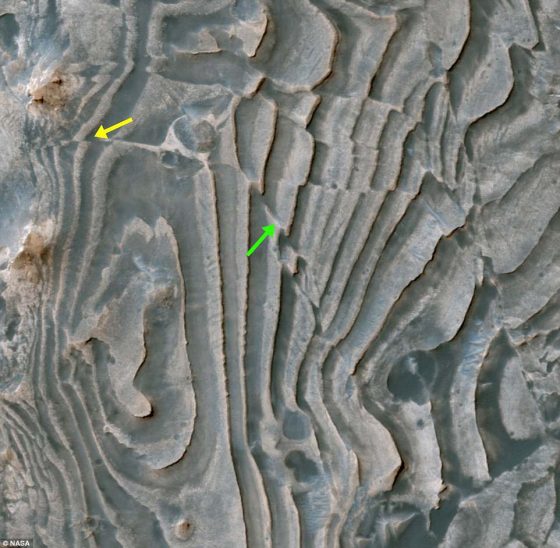 “These observations suggest that some of the faultings occurred while the layered deposits were still soft and could undergo deformation, whereas other faults formed later when the layers must have been solidified and produced a clean break,” NASA explained.

Speckling the surface of one of Mars’ oldest impact basins, NASA’s Mars Reconnaissance Orbiter recently spotted a sprawling expanse of ‘honeycomb’ landforms, with individual cells of up to 6 miles wide.

The origin of these textured features has long remained a mystery, as scientists debate which type of natural process could be responsible, from glacial events to wind erosion. But it is still possible that multiple processes are at play, according to NASA. There is evidence suggesting the honeycombs and the surrounding landscape in Mars northwestern Hellas Planitia may still be undergoing activity today.

According to NASA, “the lack of impact craters suggest that the landscape, along with these features, have been recently reshaped by a process, or number of processes that may even be active today. Scientists have been debating how these honeycombed features are created, theorized from glacial events, lake formation, volcanic activity, and tectonic activity, to wind erosion.”