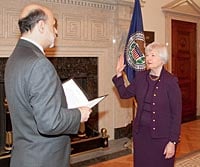 It might be taken as a bad omen for the economy. Perhaps, it was the sign of a sick market.

Then again, the Federal Reserve is not too obvious with its hints about future policy and its effects on policy.

Nonetheless, during a speech where many were watching for news about a possible rate hike, Federal Reserve chairwoman Janet Yellen had a bizarre moment on stage where she stumbled over several words, then froze up as if she was having a stroke before appearing to nearly vomit and ending the speech abruptly. CNBC noted that she “appeared to pause and cough multiple times” and that “Yellen told officials at the event that she was light-headed.”

It was really quite startling. CNN Money posted: People are freaking out about this Janet Yellen speech, while Twitter took notice as well.

Yellen faltered at end of her speech. Last page was agonizing. I don’t think she felt well but she seemed better when she left the stage.

Yellen was escorted off stage and treated by a medic from the UMass campus where she was giving the live speech. Reports were quick to point out that Yellen was not hospitalized – lest further confidence be lost. “She’s fine…” was the quick response from officials, while she reportedly resumed her schedule.

“Chair Yellen felt dehydrated at the end of a long speech under bright lights. As a precaution, she was seen by EMT staff on-site at U-Mass Amherst. She felt fine afterward and has continued with her schedule Thursday evening,” the Fed said in a statement.

Zero Hedge reported on the strange occurrence, and posted the video of the final minutes of her speech, when she pauses, appears uneasy, and takes several moments to regain her composure, before ultimately deciding to “stop there” after burping or nearly vomiting twice.

Although her health reportedly improved after leaving the stage, it was enough to rattle the markets who see any slips as bad news for investors.

As Zero Hedge reported, the initial reaction was a dive in stocks (as the chart shows):

Beyond this temporary decline on the stock market, which lasted only a few minutes, the markets are spooked and have been for some time.

Already, stock futures dropped significantly ahead of her speech at University of Massachusetts Amherst and the market was down at closing.

There was some indication of changing Fed policy, and lots of mention about China’s devalued currency. “Federal Reserve boss Janet Yellen said she expects a US interest rate hike by the year’s end,” the Business Times reported.

However, there remains a great deal of nervousness:

“Everybody right now has become a technical analyst because this market action is not predicated on economic news, earnings, or overseas action,” Pavlik said. “There’s just a general lack of confidence and people are confused and when that happens, they don’t buy stocks.” (source)

The Federal Reserve’s quantitative easing policy has severely strained investors who are earning little to no return on their money, while many understand that any increase in the interest rate – currently at or near zero – could also be devastating to the market and investors.

It is interesting that so many political faux pas and gaffes play into the news of the day.

Online commenters offered speculation that Yellen could have been poisoned or electronically attacked by an adversary such as China, who might seek to threaten or silence her before raising rates.

It left others speculating that she was having trouble holding it together under the weight of guilt about the negative impact that the Fed’s decisions have on the country. One commenter wrote: “She knows collapse of the bond/dollar bubble is right around the corner” while another said, “This woman knows damn well what is about to happen to the United States. The sh** is about to hit the fan very soon.”

Rightly or wrongly, Yellen’s ‘falter’ on stage could trigger further rumblings about confidence in the United States’ private central banks, and in world markets generally, which are now falling and could collapse with the right piece of bad news.

Things stand at a precipice, and the Fed is clearly not prepared to play chicken.