MARK MY WORDS: Stocks DEATHTRAP – Stay The HELL AWAY!

Every two or three weeks, I see another article published on how Warren Buffett’s holding company, Berkshire Hathaway, is underperforming the S&P 500 and how his cash pile of over $128B is a giant waste – since it could be making his shareholders a fortune, had it been invested in this late-stage bubble surge.

While that’s temporarily true, it is also important to remember that Buffett isn’t a stock investor; he is a business owner who seeks to own portions of businesses, purchasing their equity when the rate of compounding could be uniquely high, holding them forever, not for short periods of time.

Right now, that’s simply not possible to do. While it is true that if one buys more of the S&P 500 index today, he is almost guaranteed to make money over time and will certainly be able to generate an above-inflation return over a period of 10-15 years, he could also WAIT and make much more.

Sitting on cash isn’t popular or profitable, but if you have REASON TO BELIEVE that stocks are due for a 20%-50% downside crash, Dot.Com-bubble-burst-style or 2008-style, there’s a LEGITIMATE reason to be cashed-up.

Buffett isn’t the only billionaire or the only serially-successful, illuminated investor that is CAUTIONING the average person to stay clear of stocks at the moment. Howard Marks, who wrote the best investment book I’ve ever read, is also publicly warning about the expensive markets.

Here are a number of the charts and data points that they’re watching: 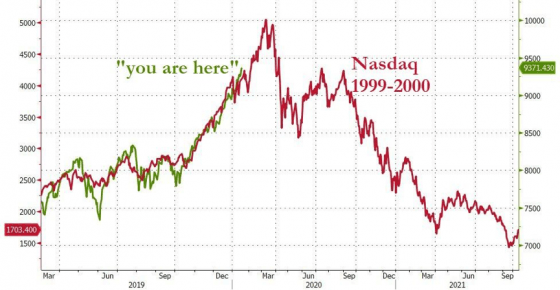 Not only is the S&P 500 historically OVERBOUGHT, expensive and risky as hell; the NASDAQ is looking like a perfect bubble about to pop!

Take a look: the Relative Strength Index is as ALARMING as it was right before the Dot.Com burst and before the 2016 and 2018 corrections:

The index isn’t comprised of penny tech stocks like back then, but the logic of putting new money into the index right now is, in my book, ALMOST non-existent. The risk/reward setup is totally biased against you.

If this is the case, and if all hedge funds, pension funds, and self-managed accounts can see the writing on the wall, why are investors still LONG as they’ve ever been?

Before I get to answering that, notice how COMPLACENT buyers are, on top of being greedy – the VIX is sitting at all-time lows: 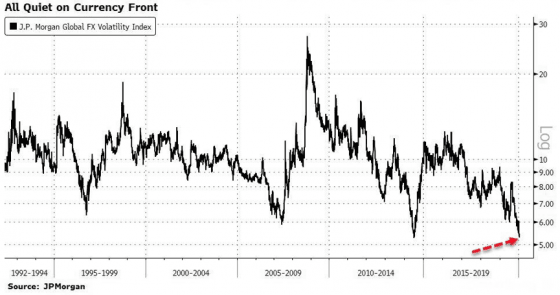 The answer is that they’re POSITIVELY CONVINCED that the Federal Reserve, the European Central Bank and the Bank of Japan, as well as the People’s Bank of China, will do ANYTHING – absolutely ANYTHING – to avoid a recession. In fact, the first Wall Street billionaire has officially stated that the FED might even cut rates to ZERO.

This is not a gold bug that has been predicting doom and gloom for 40 years in a row, like a broken clock, and advising to build shelters in the hills; it’s a mainstream investor who is educated with the history and likelihood of such policies.

As I see it, interest rates under the dollar reserve currency system are NEVER going up again!

If we live in a world where bonds don’t generate any interest, then stocks become much more valuable, automatically; this is their main allure. This is the reason that sellers aren’t taking profits – where would they go for returns? 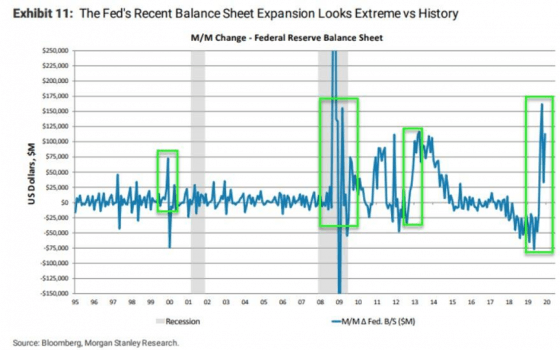 The FED is already STIMULATING in irregular amounts and frequency in the past few months. In essence, it is acting as though it is fighting off a recession, but I remind you that U.S. unemployment rates are at half-century lows, the consumer is enjoying low debt burden and taxes have been cut. Logically, the central bank shouldn’t be embarking on stimulus plans in 2020, but it is.

All I can say is that stocks might be a DEATHTRAP; that is, traditional indices like the S&P 500, NASDAQ and Dow Jones are seriously ON THE PRECIPICE of something ominous.

In all such previous moments, in 2000 and in 2008, the commodities sector was the biggest winner of the HEDGING strategies that smart money implemented. 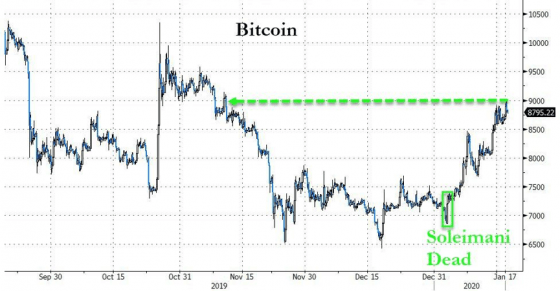 Bitcoin is already having its BEST START to a calendar year and palladium, the 4th precious metal, is going PARABOLIC as well.

Bottom line, this is the most overbought market in history, which is in this shape – not due to strong fundamentals, but SOLELY thanks to the assumption that central banks will be PERFORMING MIRACLES to keep this from deflating.

It’s your call on how to address these facts and how to make money in a world that has clearly lost all risk aversion. In my case, I will continue to hedge by owning the HIGHEST-QUALITY resource stocks, which have already DOUBLED for us since June 2019.

Expect a very important alert from us this week.