Marijuana Becomes the Last Crime to be Decriminalized in D.C. 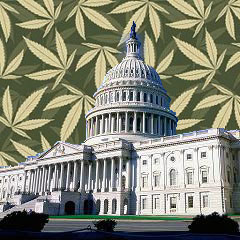 In the area plagued by ‘taxation without representation’ that has affectionately become known as the District of Criminals – where the federal government and lobbyists make deals so shady it would make Al Capone blush – possession of marijuana has been legalized by way of a referendum during last night’s election.

And all while the Republicans took the Senate on Capitol Hill…

Allowing possession of up to two ounces and growing up to six plants, weed has pretty much become the last crime to become all but officially legalized there.

Voters in Washington, D.C., have approved the legal use of marijuana for recreational purposes. Supporters of the D.C. marijuana measure had a 65-29.5 percent lead as of 9:09 p.m. ET, with 20,727 voting in favor.

The D.C. case could create friction between the city’s leaders and Congress — particularly if, as many expect, Republicans take control of both chambers. The District’s Initiative 71 includes provisions that allow residents to grow six or fewer marijuana plants in their homes and possess up to 2 ounces of the drug for their own use.

And it was approved handily by voters.

It is, after all, the city that elected Marion Barry back to the D.C. City Council and later back to the D.C. Mayor’s office after he was busted smoking crack cocaine in a hotel room on camera while he was mayor. His campaign staff went with the all-too-appropriate slogan “He May Not Be Perfect, But He’s Perfect for D.C.”

After all, it is the big fish who are engaged in the real crime while in power. Their city is more like a haven for scheming and organized theft than it is a place of lawmakers, diplomats and officials (though they happily wear the mantle of their elected and appointed titles).

This is the place where illegal executive orders, illegal wars and unconstitutional acts are brazenly entered into official policy and too big to actually be considered crimes.

Prostitution long ago passed proportions of plague and epidemic, instead becoming standard parts of lobbying packages and the generic fodder for political blackmail. Pork barrel legislation and other corrupt abuses of power come just as standard. The members of Congress can officially speed and get away with other petty offenses just by virtue of their office, while foreign diplomats are all but untouchable from even the most heinous crimes under treaty protections.

And aside from occasional isolated incidents, politicians and diplomats can virtually expect to never be prosecuted for their actions. What happens in D.C. stays in D.C.

Marijuana, on the other hand, was originally criminalized under dubious circumstances in the vacuum of the end of alcohol prohibition and heavy influence from industrial titans who saw hemp as a threat to other commodities they controlled.

At the very worst, marijuana has been a vice that has allowed the prison-industrial complex to cash in and fill private prisons with non-violent drug offenders.

It seems ironic that this petty crime would finally join the ranks of all the actual sin and misdeeds that make this notorious city so odorous. But even then, it is no surprise at the hypocrisy, given that some members of Congress introduced legislation to prevent the city from allowing legalization after Mayor Vincent Gray decriminalized it earlier in the year, should voters decide to approve the measure for full legalization.

Back in June, this happened:

An amendment that would make it impossible for the District of Columbia to lessen penalties for marijuana possession — and possibly to legalize the drug — passed Wednesday in the House Committee on Appropriations, drawing a rebuke from the District’s mayor.

Rep. Andy Harris (R-Md.), who proposed the amendment in committee, said that his background in medicine motivated his efforts to block the District law.

“As a physician, I have read study after study on the devastating effects of marijuana use, especially on developing brains of teenagers,” Harris, who is an anesthesiologist, said in a statement. “Congress has the authority to stop irresponsible actions by local officials, and I am glad we did for the health and safety of children throughout the District.”

“Representative Harris can’t overturn the marijuana decriminalization laws of the 18 states that have decriminalized marijuana so he has stooped to using autocratic, anti-democratic power to seek to overturn our local laws,” said Del. Eleanor Holmes Norton (D-D.C.) in a statement on Tuesday.

How that amendment could affect last night’s vote remains to be seen, but the ACLU released a report detailing how D.C. has the highest per capita number of arrests for possession of marijuana in the entire country.

ACLU Attorney Paul Zuckerberg commented, “Not only do we lead the nation in marijuana arrests per capita, but 90.9 percent of people arrested in the District for marijuana possession are black.”

Oregon and Alaska also voted to legalize marijuana in yesterday’s elections, while measures in Florida failed despite strong showings that indicate the national attitude towards the criminalization of this drug has changed significantly.