We’ve spent many hours travelling through airports the world over and have often noticed, especially on those early morning flights, individuals who choose to wear their pajama pants on the flights. Let’s face it, flying isn’t exactly the most comfortable experience one can engage in. Usually, and this is stereotypical of us, those pajama pants are being modeled by female college co-eds. Not once has this ever been an issue. Up until now, that is. 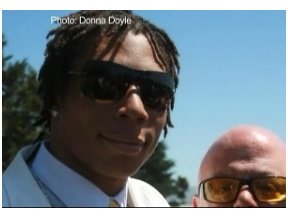 It turns out that if you’re a black male wearing pajama pants on your flight, however, you are violating airline dress code policy, subject to a citizen’s arrest, and in criminal violation of some non-existent law. Deshon Marman, a college football player with a full athletic ride at the University of New Mexico was removed from a U.S. Airways flight and subjected to the above for doing just that – wearing clothing deemed inappropriate by the pilot.

Marman first told ABC, he wanted to apologize to all of the passengers that had been disrupted from their travel plans because he never thought this incident surrounding his pajama bottoms would have escalated to this point. But he felt he was a paying passenger who didn’t present any cause to be removed from the plane.  He told reporters that a flight attendant asked him to leave his seat and then the pilot asked for his boarding pass.

We’re glad he gave his side of the story. Prior stories made it seem like he was wearing sagging jeans when they were baggy pajama pants. We’ve seen plenty of passengers walking around in pajama pants and much less on flights throughout the country. We’re not sure what the pilot meant when he said Marman is not like everybody else.

The pilot subsequently deplaned the aircraft to protect passengers from Mr. Marman and his pants.

Apparently, Mr. Marman refused to be handcuffed in the jetway after leaving the plane and an officer was reportedly injured in the scuffle. Marman was charged with trespassing, battery and interfering with the duties of a police officer. No video of the events after he deplaned has been made available, but given the recent string of artificial and trumped up charges by police and private security guards around the country and the fact that Mr. Marman was fairly controlled in his encounter on the airplane, we won’t believe the charges are legitimiate until we see the tape.

Mr. Marman faces up to 4 years in prison for battery and one year and six months in county jail for the two other charges.

A video of the encounter on the plane has been made available. It depicts a frustrated Marman, yet a man who seems to be completely controlled in his argument and demeanor:

It was first reported that the pants he was wearing were sagging and baggy. We have since learned that they were actually pajama pants, according to Mr. Marman himself.

The Chief Deputy District Attorney, when questioned about the charges, replied:

“We’re not deciding how somebody wears their clothing is a crime. Because it’s not. What we’re deciding is whether or not there was an interaction that occurred (where) there was conduct by Mr. Marman that violated the laws in his dealing with the police and with the personnel there. That’s what we’re looking at. This has nothing to do with whether it’s inappropriate for somebody to wear their clothing in a certain way. That’s not of interest to us.”

The fact that Mr. Marman was initially detained and then arrested for comitting no crime is of no significance or interest to the DA. The Supreme Court of Indiana recently ruled that individuals have no right to defend themselves from an unlawful entry by a police officer, essentially throwing the fourth amendment in the trash (*note, that this incident occurred in California). It seems Indianda isn’t the only state that finds it OK to seize a person without probable cause. It is our view that if Mr. Marman committed no crime to begin with his detainment, arrest and jailing were in clear violation of his Constitutional protections to be safe and secure within his own body.

A spokesman for U.S. Airways also responded to the incident in a move to clear any wrongdoing on the part of the airline. In an interview with KQED News:

Is it a policy of U.S. Airways to remove people from planes for wearing pants that expose their underwear?

(In) this particular incident, the individual was removed from the aircraft after repeatedly ignoring crewmember instructions.

What was the safety concern related to his attire?

The safety concern was repeatedly ignoring the crew members’ instructions.

How does that become a safety issue?

The safety of all our passengers and employees is our top priority and it’s important to adhere to crewmember instuctions, which is paramount in ensuring a safe and comfortable traveling environment.

Regardless of the content of the instruction, you mean?

US Airways does not have a specific dress code. But we do ask our customers to dress in an appropriate manner to ensure the safety and comfort of all of our passengers.

Where is that written?

We don’t have a specific dress code.

When you say you ask passengers, where is that ask made?

I’ll have to find that out for you and let you know.

This entire incident stemmed from the pilot of the aircraft deeming Mr. Marman’s pajamas a safety issue and potential threat to passengers.

The following apparel, however, is just fine: 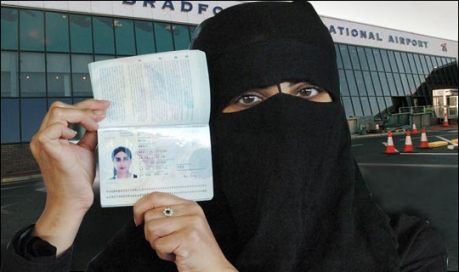 (*Note: We are not attempting to single out Islamic dress, but simply wanted to point out the ridiculousness of it all. We are aware the Muslim Americans have also been kicked off of airplanes in several instances because of their clothing. However, for the most part, dressing in full Islamic apparel has not led to the same treatment as what Mr. Marman received)

Mr. Marman boarded a plane after having attended a funeral for a friend. He wore pajamas. He was accosted and stood up for his rights as a Constitutionally protected American who was being singled out for absolutely no reason that we can discern. The state is now prepared to take away the life which he has built through hard work and dedication.

The arrogance and egos of those involved will not allow this individual a fair trial if they have their way, especially if we don’t get to publicly view the TSA security tapes from the jetway and the events that occurred after all the passengers deplaned and the personal video recording was shut off.

This serves as a warning to us all: If and when the agents of the police state (and there are many of them, many don’t even realize they are agents of tyranny) get their talons in you, you’d better comply – with a smile, or face years in prison in the interest of justice being served.

They will take your freedom, your livelihood, your money, your family, and your life if it serves their interests.