Man Destroys Corrupt City In Bulldozer Rampage: “What Happens When You Have Too Much Government Interference” 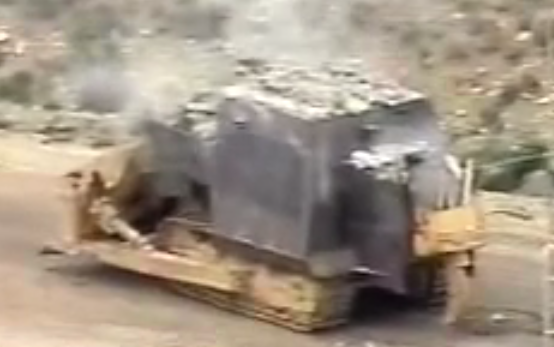 Sometimes, when you push people too far, they push back.

And that has never been more true than when a man from Granby, Colorado decided to build a homemade tank, reinforced against armaments of all kinds, and take out the institutions he saw as corrupt.

But what it does show is the level that many Americans can and will reach when they’ve had enough.

This is not a question of whether what he did was legal, or justified. No one can condone this. Instead, this is simply a matter of a man who was fed up – rightly or wrongly, he was no longer going to be pushed by his government, he was going to push back.

A news helicopter filmed much of the rampage.

Here’s the story of what happened.

Marvin John Heemeyer, an American welder and an automobile muffler repair shop owner most known for his rampage with a modified bulldozer. Outraged over the outcome of a zoning dispute, he armored a Komatsu D355A bulldozer with layers of steel and concrete and used it to demolish the town hall, the former mayor’s house, and other buildings in Granby, Colorado. The rampage ended when the bulldozer got stuck in the basement of a Gambles store he was in the process of destroying. Heemeyer then killed himself with a handgun.

The machine used in the incident was a Komatsu D355A bulldozer fitted with makeshift armor plating covering the cabin, engine and parts of the tracks. In places this armor was over 1 foot (30 cm) thick, consisting of 5000-psi Quikrete concrete mix sandwiched between sheets of tool steel, to make ad-hoc composite armor.

This made the machine impervious to small arms fire and resistant to explosives: indeed three external explosions and more than 200 rounds of ammunition fired at the bulldozer had no effect on it.

For visibility the bulldozer was fitted with several video cameras linked to two monitors mounted on the vehicle’s dashboard; the cameras were protected on the outside by 3-inch (76 mm) shields of bullet-resistant plastic. Onboard fans and an air conditioner were used to keep Heemeyer cool while driving, and compressed-air nozzles were fitted to blow dust away from the video cameras. He had made three gun-ports, fitted for a .50 caliber sniper rifle, a .308 semi-automatic, and a .22 long rifle, all fitted with a half-inch-thick steel plate.

Clearly, Heemeyer was on a suicide mission to make an unforgettable statement about a condition of government which he found to be egregious and tyrannical. To date, it remains the most famous incident in the small town’s history.

As things continue to break down, as Americans struggle, and injustice sweeps the land, there will be more individuals pushed over the edge. Some Americans just won’t take it anymore. Remember when a man named Joe Stack decided to go kamikaze on an IRS building in Austin, TX? He listed his reasons, right or wrong, and was heard much loudly and clearly that the individual in the voting booth, or the one holding the protest sign that no one payed attention to.

He sent a message that government officials surely took note of – a maximum is approaching were where people are prepared to react with anger, violence, unrest, and, sometimes, a dogged fight to the bitter end.

Moreover, as assassinated president John F. Kennedy pointed out, when the powers that be make peaceful revolution impossible, violent revolution becomes inevitable. Clearly, things can only go so far before a resistance natural crops up, whether it takes the right or wrong form is a another matter.

As George Olivier commented regarding the homemade tank bulldozer rampage:

“This is what happens when you have too much government interference. Not saying it’s right, just saying some people will flip out. Government has way too much power”

This can and will happen again.

What will happen to millions of Americans when they lose their homes, their pensions, their jobs or their children to corrupt policies put in place for crony corporate gain? Or when a major crisis hits, perhaps taking out the grid, or leaving store shelves empty for days on end?

There is an amazing propensity for people to lose it, and go AWOL inside their own minds. Some are on a mission to correct perceived ills; others turn to greed and debased sub-human behavior out of desperation and loss of direction and order in society.

This isn’t a matter of heroes and villains, it is a matter of a time when the final restraints that are keeping people polite, and relatively under control are undone. There is a point at which all barriers to abnormal and completely extreme behaviors are removed.

Woe is the man or woman who isn’t prepared for that eventuality, for the breaking point in any given individual, or the shattering of an entire society.

Just try to push them any further, and you may find out what they are made of…

The Election Is A Ticking Time Bomb: “Chaos Will Erupt In Less Than 100 Days”