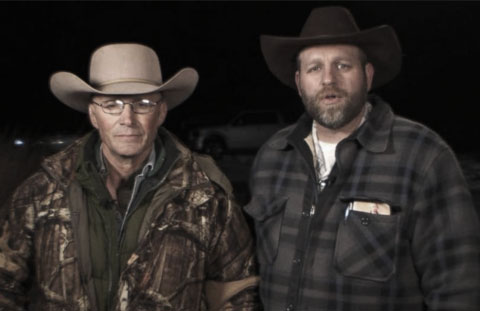 Can you believe 2016 just started, and already people are calling for a bigger police state where the government can kill citizens without due process, charge or trial?

It seems that many on the Internet want another Waco – a lethal federal government show of force for the Obama age. You know,
to keep the right wingers, pro-gun nuts, anti-government types, patriots and conspiracy theorists at bay.

Numerous voices are calling for a literal bloodbath in Oregon – and the exercise of unilateral government power to kill the individuals involved, including supporters. It is an armed and highly-charged, but so far peaceful situation that is, nonetheless, rooted firmly in civil disobedience and principle. But that hasn’t stopped opponent from calling for them to be treated like domestic terrorists.

Twitter users across the globe and across the political spectrum have been calling for the use of lethal force to end their standoff:

I hope the #OregonUnderAttack stand of ends like Ruby Ridge only worse. They shoot them all in the head and hang the militia leader. #FuckU — nelson jancaterino (@Jancaterhoopty) January 3, 2016

Special ops should be there to negotiate with this terrorist group,and if negotiations fail, shoot them. #OregonUnderAttack #Oregonstandoff — ♔Maliheh♔ (@Maliheh_) January 4, 2016

So it’s time to shoot down them bastards in Oregon. #TamirRice didn’t point a gun at anybody. #OregonUnderAttack https://t.co/BmOotK7WDL — Acknickulous White (@SirSeriousBlack) January 4, 2016

The authorities shoot those fucking terrorists, they are an embarrassment to white people and Americans in general. #OregonUnderAttack — PDX_love (@FireFighterFitz) January 4, 2016

Even talk show host Montel Williams is getting in on this, calling for the National Guard to be given “shoot to kill” orders:

Then let’s give them some – put this down using National Guard with shoot to kill orders. https://t.co/KSzUZzUor6 — Montel Williams (@Montel_Williams) January 3, 2016

So the issue is incendiary in every way, and there is every chance that this uprising/firm stand could get out of hand, despite assurances from those who started it that everything is peaceful. According to Good Morning America:

Ammon Bundy said Sunday that the group’s actions are not aggressive and there is no damage or criminal activity. Local Harney County Sheriff Dave Ward has accused the group of “claiming to be part of militia groups supporting local ranchers, when in reality these men had alternative motives to attempt to over throw the county and federal government in hopes to spark a movement across the United States.”

Even with a cautious tone from law enforcement, people responding to media coverage are seeking violence. As many pointed out, the response on social media has once again revealed the bloodthirst of liberals – who love using force and state power to impose their will.

All of you savages screaming for white blood, be patient. I’m sure they will broadcast the new Waco/RR live. #OregonUnderAttack — Dr. Illusion (@GoodDktr) January 3, 2016

And predictably, racism has been invoked as a justification for firing upon these armed protesters. The Young Turks host Cenk Uygur set the tone:

Did the cops shoot the armed thugs who took over federal property within two seconds? No, that’s only for black children? #OregonUnderAttack — Cenk Uygur (@cenkuygur) January 3, 2016

It seems that some #BlackLivesMatter activists are fine with government force, so long as it is aimed at someone who is white. Apparently, because someone black was wrongfully killed by police (like 12-year old Tamir Rice), the same treatment should necessarily be extended in dealing with those who are not:

The response from the left has been to play up issues of racial divide – contrasting the treatment by police/authorities with mostly black protesters and rioters involved at Ferguson and their treatment with mostly white rancher in a rural dispute.

Of course, if what was done against black police abuse victims is legitimized against white ranchers, the government gains the power to use the treatment against everyone it determines to be a dissenter or enemy.

Two wrongs don’t make a right, unless of course the issue is a left/right or black/white one.

Liberals on #OregonUnderAttack “Police are bad when they oppress blacks but those honkies in the country… yeah police should shoot them” — Vlad (@therealvladP) January 4, 2016

And the odds of widespread civil unrest and even outright civil war grows stronger by the day.

With the right crisis, the federal government could wipe the slate clean on pesky rights and divisive protesters. Stay vigilant.

Rancher Cliven Bundy Speaks: “I Don’t Recognize Them Having Any Jurisdiction or Authority Over This Land” *Video*