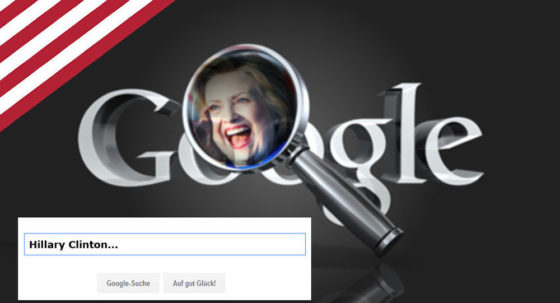 According to Dr. Robert Epstein, a search engine expert, psychologist, and liberal Hillary Clinton supporter, the disgraced former presidential candidate has “long depended on Google for both money and votes.” Dr. Epstein has come forward proving Google is manipulating elections in favor of tyranny.

Epstein, who was a Clinton supporter during the 2016 election, blasted Hillary on social media after she falsely claimed his research proving there was a pro-Clinton bias from Google in 2016 had been “debunked.” Dr. Epstein’s research has not been debunked, in fact, more evidence comes to light every day about the lengths Google is going to censor dissent and hide content they don’t want to be seen.

#Hillary has long depended on #Google for both money & votes. Her largest donor in 2016 was Alphabet/Google. Her Chief Technology Officer during the campaign was Stephanie Hannon, a former Google exec. And then there's #EricSchmidt, longtime head of Google – the guy in the pic: pic.twitter.com/dSV8wOPwAH

Dr. Epstein said Hillary Clinton should be “ashamed of herself” for falsely claiming Google didn’t help her in the 2016 election.

Now, switching to .@HillaryClinton: This is going to hurt me to write, because I & my whole extended family have been strong supporters of the Clintons for decades. I have a framed, signed letter from #Bill on the wall near my desk. But #Hillary should be ashamed of herself. pic.twitter.com/FKyLiKonyw

A leaked email showed that in 2014 #Google's #EricSchmidt offered to run #Hillary's tech campaign (see pic). In 2015, Schmidt in fact funded The Groundwork, a highly secretive tech company, the sole purpose of which was to put Clinton into office. https://t.co/rXMNH9bLYV pic.twitter.com/MRjGpCJcvr

“Google poses 3 serious threats to humanity: 1) an obscene level of surveillance across 200+ platforms, 2) the power to determine what content 2+ billion can or can NOT see (censorship) (https://usnews.com/opinion/articles/2016-06-22/google-is-the-worlds-biggest-censor-and-its-power-must-be-regulated…) & 3) invisible manipulation on a massive scale.”

#Hillary: #Google poses 3 serious threats to humanity: 1) an obscene level of #surveillance across 200+ platforms, 2) the power to determine what content 2+ billion can or can NOT see (#censorship) (https://t.co/THZqV4u0ov) & 3) invisible #manipulation on a massive scale.

Epstein even took to cracking a joke about the infamous Clinton Body Count hashtag:

Okay, this is sort of funny…. It's been suggested that I remind people that I AM NOT SUICIDAL!!! I love my life, wife, 3 awesome sons, 2 awesome daughters, my research, etc. etc. Everyone got that??? Thanks to @Pumped_4_Trump for the suggestion. pic.twitter.com/TDBztmO3ZN

The evidence is clear and undeniable.  Google manipulates people, pushes propaganda, attempts to change minds and sway votes, hides information, and pushes false official narratives for a political agenda: complete enslavement of humanity by democrats under the guise of socialism.

Hillary is “in Google’s pocket,” said Epstein.  But people are waking up to what’s being done to them at alarming rates.