Let’s Start A War: These Politicians Will Meet in the Comfort and Safety of Washington to Decide the Fate of Millions

SHTFplan Editor’s note: With all the talk of Syrian President Bashar Al-Assad’s transgressions against his people, perhaps it’s time we consider what our own government is doing right here in America. And while we don’t support  the dictatorial means by which Assad controls his country, isn’t it hypocritical to accuse him of crimes against humanity when our very own government engages in similar activities against its people? In the following insightful article Chris Carrington of The Daily Sheeple explores the arguments set forth by the Obama administration, and turns them inwards.

President Obama could potentially launch the opening salvos of World War III within the next week, and we’re doing so by claiming Bashar Al-Assad’s regime is violating the human and civil rights of his people. What about our government? Isn’t it behaving in much the same way? And thus, would China or Russia be able to make similar claims in the future should they choose to turn their military power on us in the future?

‘Let’s Start A War’ – An Alternative View
by Chris Carrington 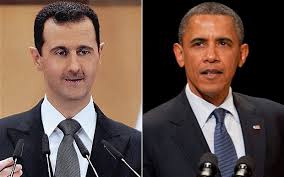 Today, September 9th 2013, is the day Congress will debate the prospect of war. Then, when the debating is done, they will vote on President Obama’s recommendation that the United States bomb Syria back to the stone age.

These well heeled politicians will meet in the comfort and safety of Washington to decide the fate of hundreds of thousands, if not millions, of Syrians. Most of them couldn’t point Syria out on a map let alone comment on the complex and tribal issues that beset the country.

Obama will preen and primp himself ready to appear on the television. He is due to appear on several networks today. Then tomorrow he will deliver his speech to the nation. In that speech he will lay out why the United States needs to bomb a foreign land.

He will cite chemical weapons, an oppressive regime, and a humanitarian crisis that calls for the intervention of the West.

He will talk of ‘evidence‘ that regime forces carried out the attack and the numbers of people killed and sickened.

He will tell of the ‘crimes’ that the Assad regime is supposedly committing against his own people.

He will probably quote United Nations statistics about the dead, the injured and the displaced.

He will talk about the lack of medicines and medical care, the effects on the children.

He will talk about anything and everything that he thinks may sell his vision to the citizens of the United States.

How interesting it would be if Assad gave a press conference and a speech to his nation talking about the United States.

He could cite the mass killing of American civilians by their own government with chemical weapons. He could also mention that enforced injection of chemicals is the price American children have to pay before they are allowed an education.

He could say that it’s an oppressive regime, that the government routinely reads and listens in on the electronic communications of its citizens. That it violates their rights at every twist and turn.

He could tell Syrians that American citizens can be imprisoned without trial and that some citizens are not allowed to return to their homeland after going on vacation.

He could tell them that even uttering certain words in public or worse still writing them down, can get you marked as a terrorist. Syrians would be shocked at the number of nondiscussion subjects that can get you watched or arrested.

He could say that children go hungry everyday, that medical care is unavailable to millions. That hundreds of thousands of people cannot afford simple antibiotics and other life saving drugs.

He could talk about the ‘death squads‘ that kill those who are brave enough to speak out, those who dig around and uncover proof that the regime is corrupt and sullied.

He could tell his people that the United States government is trying to override the Constitution drawn up by the Founding Fathers and is trying to disarm the population.

Just for good measure he could mention the homeless living in tent cities and in drainage tunnels under major cities.

He could send his secretary of state on a trip to all the Middle East nations drumming up support for a coalition that should end the abuse of the American people.

The secretary of state for Syria could point out to all the other Middle East leaders that although these things are happening half a world away, they have a duty to the American people to step in and stop the situation from declining further. The Obama regime needs to be removed in order for the people to enjoy the freedoms they once did.

A red line has been crossed, and something has to be done.

Chris Carrington is a writer, researcher and lecturer with a background in science, technology and environmental studies. Chris is an editor for The Daily Sheeple. Wake the flock up!