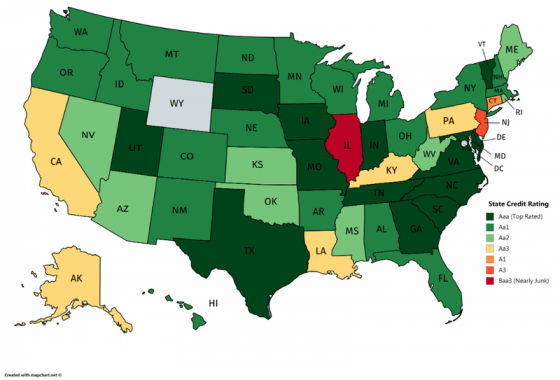 In the latest suicidal move by New Jersey, the state which after Illinois is in the direst of financial straits and has the second-lowest credit rating in the nation…

… On Thursday morning, Jersey Governor Phil Murphy and Democratic leaders agreed on a budget deal that will raise taxes on millionaires, sparking another exodus from a state which has already seen many of its richest residents – such as David Tepper – depart for more hospitable states.

As the NYT gloats, “Gov. Philip D. Murphy campaigned on a vow to raise taxes on the rich in New Jersey. It took three years and a pandemic to get it done.” Clearly the NYT has any idea just how worse off the state will be in a few years as a result of sliding real estate prices and broadly lower tax revenues.

Murphy, a former Goldman Sachs executive and fervent Democrat who took over as NJ governor from Chris Christie in 2018 was expected to announce on Thursday morning a deal that includes a higher tax rate for residents earning more than $1 million a year. In keeping with Murphy’s social justice warrior ambitions, the agreement also includes a $500 rebate for families with at least one child and an annual income of less than $150,000 a year for couples and $75,000 for single parents. The new tax is expected to generate an estimated $390 million this fiscal year, while the $500 rebate is expected to cost about $340 million a year.

“Blink and you’ll miss the next Trenton tax hike,” the state’s Republican chairman, Doug Steinhardt, said in a statement. “That’s how fast Phil Murphy and his Democrats are spending your money.”

New Jersey must have a budget in place for the Oct. 1 start of the revised fiscal year, a nine-month cycle. The current fiscal year was lengthened by three months amid uncertain revenue during the novel coronavirus pandemic. The new spending plan includes $4 billion in borrowing to plug a revenue gap.

New Jersey’s move is an early glimpse of what will happen to tax rates across the country should Joe Biden become president: as part of his platform, the former Vice President has proposed raising taxes on people earning more than $400,000 to finance a slate of programs.

In the Garden State, the so-called millionaire’s tax was an initiative the Democrat-led Legislature had symbolically approved for years before Mr. Murphy took office in 2018, knowing that it would never be signed into law by the former Republican governor, Chris Christie. But Murphy, a self-avowed progressive who arrived in Trenton with few legislative allies, had been unable to win support for the idea from the Senate president, Stephen M. Sweeney, a political rival, or the Assembly leader, Craig J. Coughlin.

Facing a fiscal crisis brought on by the urgent health needs of the pandemic and the months-long shutdown of businesses, lawmakers agreed to raise the tax rate on earnings over $1 million to 10.75 percent, up from 8.97 percent. Individuals earning more than $5 million were already taxed at the higher rate.

As the NYT notes, the deal underscores the “shifting political climate and a recognition that the wealthy may need to contribute more to the state’s recovery with so many residents out of work and struggling to feed their families.” And now the wealthy – who are no longer bound to a local office thanks to a Work From Home world – will show Murphy just how easy it is for them to uproot and leave to states with low, or no, state income tax.

In neighboring New York, Democratic Gov. Andrew M. Cuomo has largely resisted proposals to raise billions by taxing the wealthy, instead consistently calling on the federal government to bail out the state, which he is says needs some $59 billion to cover two years of projected state deficits. It’s a battle he will likely lose. Meanwhile, progressives in Albany have been pushing the governor to consider a variety of bills, including one to raise the tax rate on those earning more than $100 million to almost 12 percent.

The millionaire’s tax is part of a nine-month, $32.4 billion spending plan that must be adopted by Oct. 1. The proposed budget Murphy released last month also includes about $1.2 billion in spending cuts and $4 billion in new bonding debt.

And now the question is when New Jersey will complete its ritual suicide, hiking taxes on HFTs and frequent fire stock transactions, a move which will not only not boost revenues but lead to the prompt departure of such wealthy residents as the New York Stock Exchange (located, ironically enough, in NJ) and the Nasdaq.