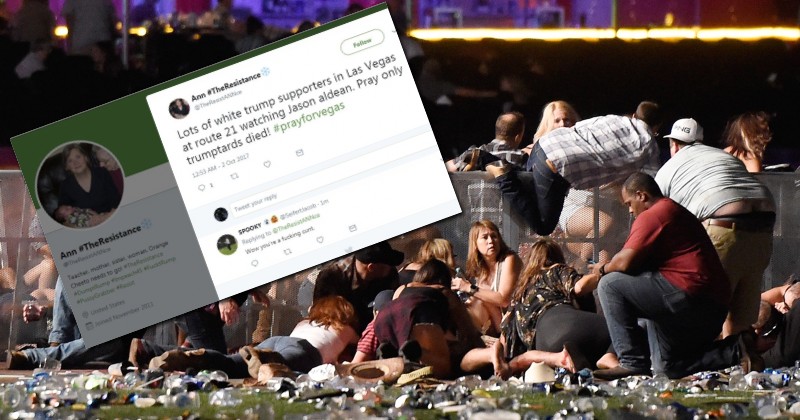 A leftist teacher celebrated the horrific massacre in Las Vegas because many of the victims are likely to have been “white Trump supporters”.

An anti-Trump activist with the Twitter name ‘Ann #TheResistance’ who is also a teacher reacted to the deadliest mass shooting in American history by tweeting, “Lots of white Trump supporters in Las Vegas at route 21 watching Jason aldean. Pray only Trumptards died! #prayforvegas.”

After the tweet began to go viral, the user deleted it and then wiped her entire account.

“Very disturbing that this woman is a teacher,” commented the Columbia Bugle. “Tragic that a woman as sick as her is teaching young minds.”

Appears she has deleted her account since her tweet. Tragic that a woman as sick as her is teaching young minds.

Another Twitter user lauded the massacre by tweeting, “Shooting at country music festival in Las Vegas?! Looks like revenge on those Trump supporters.”

If this kind of thing were rare, I wouldn't post it. It isn't. pic.twitter.com/uYdu6hYQQn

“I hope they killed more than 25 Trump supporters lol,” tweeted another.

Other leftists wasted no time in hijacking the tragedy to push for gun control, with the hashtag #GunControlNow trending on Twitter and Piers Morgan attempting to collectively impugn white men.

The massacre is the deadliest ever on U.S. soil, with at least 50 dead and over 200 injured. The shooter has been named as 64 year-old Stephen Paddock. His motive remains unknown.