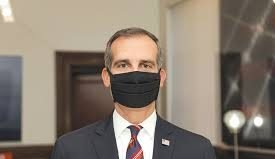 Los Angeles mayor Eric Garcetti has warned that residents hosting large home gatherings can expect their water and power to be turned off. This thin-skinned mayor is losing his power grip on the people and will stop at nothing to show just how low he’ll go to get people to obey his every command.

If nothing else, this at the very least shows that the public is no longer willing to be controlled or dictated to. Garcetti’s temper tantrum is being thrown because he was able to shut down bars, but cannot get people to stop being social with each other. “You’re breaking the law. Just as we can shut down bars breaking alcohol laws, in places that are in criminal violation, we can shut them down,” said Garcetti, who is an actual criminal and political parasite.

BREAKING: L.A. Mayor Eric Garcetti announces he is authorizing the city to shut off water and power to any houses or businesses that are hosting any parties or unauthorized large gatherings. It will begin Friday night, and LAPD will respond, then contact DWP to cut it off @FOXLA

According to a report by RT, starting on Friday, Garcetti said that the city’s Department of Water and Power (DWP) would shut off service to properties where there are “egregious” violations of local health orders, pointing to house parties in the Hollywood Hills and Calabasas in recent weeks, which he said were held in “flagrant” defiance of the law.

“While we have already closed all bars and nightclubs, these large house parties have essentially become nightclubs,” the mayor said on Wednesday, vowing to treat residential homes the same as businesses that skirt health guidelines. In other words, the mayor will dictate what people can and cannot do, meaning the slaves have an obligation to obey or be punished. In case anyone has failed to notice, that isn’t freedom.

Congratulations Eric Garcetti!!!
You have qualified for the finals of the "Bill de Blasio Award" ?for August 2020! I think you're a shoo-in!!

Politicians have been getting made fun of for their power grab and inability to control people.  Most simply want to live their lives freely and without bein bothered so long as they afford others that same courtesy. Politicians, on the other hand, want only power and control.  Remember Bill de Blasio’s snitch line?

The bottom line is that people are finally awakening to what the government has become: puppets of the bankers. Once enough figure it out, the disobedience will spread like wildfire.