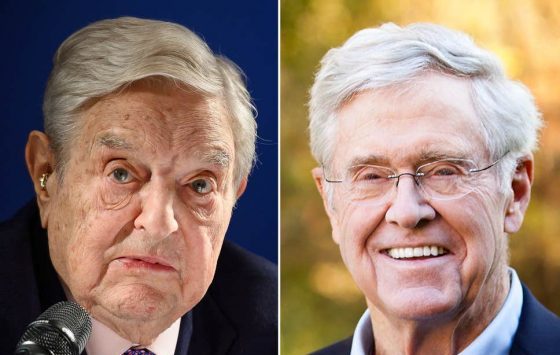 Establishment left-wing and establishment conservative billionaires are teaming up to censor the Internet.  It looks like elitists on both sides of the political aisle are trying to make sure you only get the information they want you to have.

Organizations established by left-winger George Soros and neo-conservative Charles Koch have been working together on a key priority of globalist neoliberals and neoconservatives: censorship of the Internet, according to Breitbart News. Censorship is necessary for tyranny so it makes sense that those who need the government to enslave humanity would be working together to achieve the means to an end.

Last year, the Charles Koch Institute pledged its support for the “After Charlottesville Project,” an initiative organized by the Anti-Defamation League (ADL) aimed at combating “online extremism.”

Sponsors of the initiative include Comcast, NBC Universal, the Kresge Foundation, and the George Soros Charitable Foundation.

Other groups involved in the project include a host of Soros-funded organizations, including “Hope not Hate,” the British equivalent of the far-left SPLC, and the pro-immigration National Immigration Forum.

The former group, Hope not Hate, has a reputation for far-left extremism. Liberal anti-extremism campaigner Maajid Nawaz accused them of “book burning” after it announced a campaign to get allegedly “racist” books banned by major retailers. It was also forced to retract a smear against a Jewish pro-Israel activist last year.-Breitbart News

The Charles Koch Institute, once seen as a conservative nemesis of the left, has now aligned itself with this group of left-wing, pro-censorship, anti-Trump agitators. When it comes to censoring the Internet, both the progressive and “conservative” establishment appear to be converging on a common position.

The Charles Koch Institute now also appears committed to advancing Internet censorship and aligning with totalitarianism and slavery over freedom and libertarian principles. Koch is now for  “content moderation,” as they call it. Sarah Ruger, the Institute’s director of “free expression initiatives” has praised Airbnb for canceling the reservations of far-right activists, and has called for “online hate” to be treated like a “virus.”

As always, there’s an elephant in the room — what counts as “online hate?” Is it questioning the official narrative? Is it condemning authoritarians who harm others? Is it siding with morality even though it contradicts the existence of government?  What exactly is “online hate” and who gets to decide if you’re hateful?