Kim Jong Un Threatens To Sink U.S. Aircraft Carrier If It Gets Any Closer To North Korea: “Doomed To Face The Miserable Fate Of Becoming An Underwater Ghost” 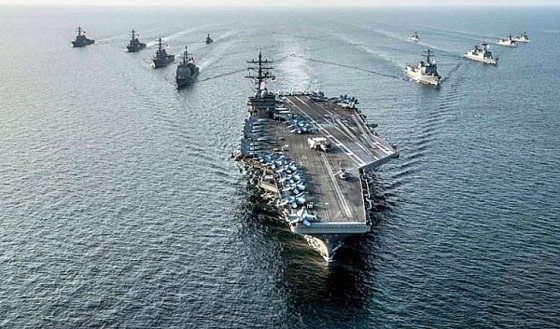 As a U.S. Naval strike group led by the nuclear powered USS Carl Vinson aircraft carrier arrives in the Sea of Japan, within striking distance of North Korea, the rogue nation’s unpredictable leader Kim Jong Un says he is prepared turn it into an “underwater ghost” should the vessel inch any closer to his border, reports The Daily Mail:

North Korea’s propaganda website Uriminzokkiri warned that if the USS Michigan ‘tries to budge even a little, it will be doomed to face the miserable fate of becoming a underwater ghost’.

‘The urgent fielding of the nuclear submarine in the waters off the Korean Peninsula, timed to coincide with the deployment of the super aircraft carrier strike group, is intended to further intensify military threats toward our republic,’ the website claimed.

The propaganda website warned they were also willing to sink the USS Carl Vinson if it edged any closer to the dictatorship.

‘Whether it’s a nuclear aircraft carrier or a nuclear submarine, they will be turned into a mass of scrap metal in front of our invincible military power centered on the self-defense nuclear deterrence.’

With rhetoric heating up and the militaries of China, Russia and the United States mobilizing, a confrontation with North Korea, which has repeatedly said it would continue to conduct nuclear and missile tests, seems all but inevitable.

In Japan, where the threat of an attack is a real and growing concern, residents are rushing to acquire protective equipment for nuclear, biological or chemical emergencies, as companies that manufacture emergency preparedness shelters and air filtration systems report panic buying ahead of a possible war.

It is not yet clear what President Donald Trump plans to do, as he has kept his hand close, nothing that he does not want to broadcast his moves ahead of time. The Trump administration has said that all options are on the table and that the United States’ previous policy of patient diplomacy has failed.

Trump has said that if China, which recently massed 150,000 troops on the North Korean border and put its military on nationwide high alert, does not take action to force North Korea to dismantle their nuclear ambitions, the United States will act unilaterally.