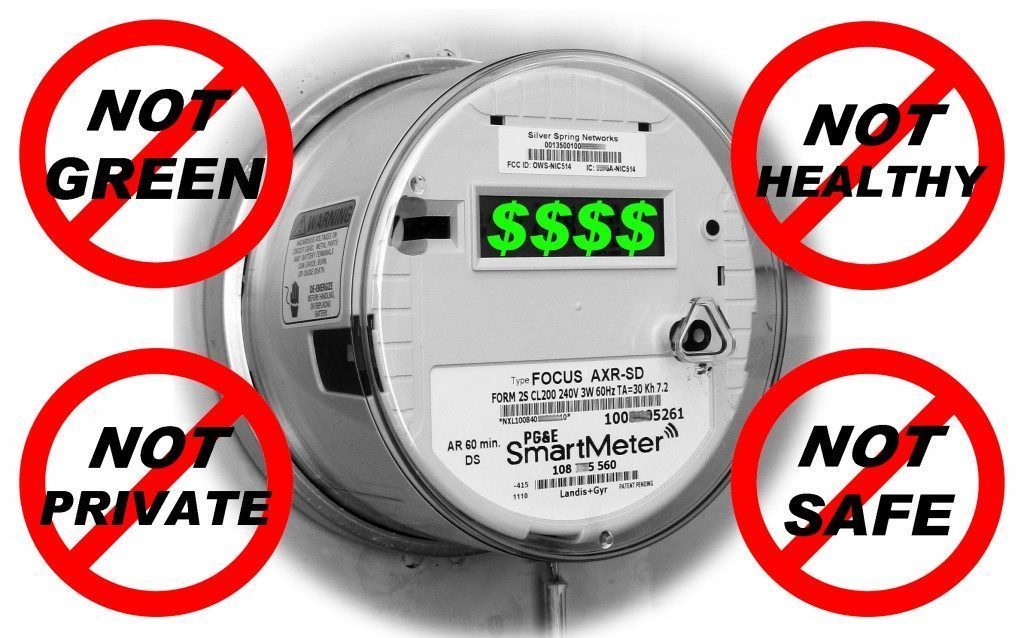 Opposition to “smart” meters (electric, gas, and water) has been ongoing since utilities worldwide started deploying them over ten years ago.  Problems associated with them include billing errors, cybersecurity risks, fires, explosions, harmful radiation emissions, mechanical issues, and short-life spans.  They are also privacy-invasive.  Nevertheless, proponents continue to laud them as being beneficial to consumers and essential for “energy efficiency” even though studies continue to prove otherwise (see 1, 2).

Of course, utilities worldwide encourage and/or force consumers to accept “smart” meters so they can remotely control consumers’ utility use as well as collect usage data 24/7 and sell it to 3rd parties – sometimes even police departments!  In the UK, complaints about these horrible devices continue to make headlines (see 1, 2, 3, 4) and recently a journalist recommended that consumers refuse them.

Why you should say no to getting a smart meter

How do smart meters work, will they save you money as energy prices soar, and can you refuse one?

The cons of buying a smart meter that everyone should be aware of.

While many people rushed to submit their energy meter readings ahead of October 1, those on fixed-price tariffs and households using smart meters were able to sit back and relax.

Millions of homes will have smart meters installed in the coming years. The national rollout, which will see energy suppliers offer smart meters to all homes by the end of 2025, has proved hugely controversial.

The Government is looking to change the way the devices work to enable suppliers to charge more for electricity at peak times and less at times of low demand. Smart meters can already send half-hourly use reports, but at the moment customers must “opt-in” to do this.

Ofgem is changing the rules so that this frequency of updates is the default setting. Customers who do not want to share this data will have to ask to “opt-out” instead. The regulator has told the industry to implement the changes by 2025.

Early adopters of smart meters received a nasty shock when they later tried to switch energy provider. Some of the “first generation” smart meters fitted in households are currently incompatible with a new national communications network – which is how your usage data is transmitted to your energy provider.

Meters not connected to this system can become “dumb” when consumers switch suppliers, meaning their new smart meters are no better than the old-fashioned ones.

Customers would have to submit readings manually as before – something which can actually be more difficult with a “smart-meter-turned-dumb” than a traditional meter.

Smart Energy GB, a government-backed campaign promoting smart meters, said that every smart meter in Britain has to undergo “one of the most rigorous safety-testing regimes in the world”.

The campaign said that the installation amounts to a free check on the gas and electricity supply in a home and that installers routinely help prevent accidents by finding pre-existing safety issues such as dangerous wiring.

However, many customers feel unsafe having their energy usage broadcast over a network, instead of being based on traditional meter readings.

Smart meters don’t use the internet to transfer readings, but instead use an independent network built specifically for smart meters. Data stored on the devices only relates to energy usage and tariff details. No other details, such as name or address or financial information, are housed or transmitted on the network.

The network has been designed with the input of GCHQ, the cybersecurity service, but there have been cases of similar meter networks being hijacked in the US.

Though these issues should not affect new smart meter users, they are indicative of the problems that have plagued the rollout.

These meters are being enrolled into a national network to fix the problem. On top of this some in-home displays, which show a customer how much energy they are using, have ceased to work once the meters have been enrolled onto the network.

Another issue is that the hardware associated with the devices will need to be upgraded in central and southern England after the Government and mobile phone providers announced plans to phase out 2G and 3G mobile networks by 2033.

You might miss out on the best energy deals

Traditionally, the best energy deals have not been available to smart meter users. Prior to the gas price crisis, only one in six deals were available for smart meter users. This is now less of an issue given the vast majority of households are on their supplier’s default tariff with prices protected by the price cap.

However, at some point energy firms will introduce smart meter tariffs that should cut household bills by varying electricity costs throughout the day.

“Time of use” tariffs drop the price of electricity when demand is low and increase the cost in times of high usage. However, currently, only Octopus Energy offers this type of deal.

The policy on smart meters was first championed by former Labour leader Ed Miliband – and later by the Tories – as a way of reducing Britain’s energy use. They had been popular in Europe for this reason.

However, some argue that there is no real evidence to back up the claim that the smart meter could revolutionize our energy habits.

The chief concern of smart meter critics, besides the cost, is the potential privacy concerns that come with a household’s data being transmitted to a supplier. Energy firms are adamant that only they can see your data and that information cannot be passed on to a third party without the customer’s explicit permission.

According to Octopus Energy, not even the DCC, the network operator, can read a customer’s electricity data, as it is encrypted before it reaches them.

A Privacy Charter drawn up by the Energy UK trade body, however, states organizations that your supplier has contracts with may be given access to the information collected from your meter.

It also stated in certain circumstances the police or other organizations, including industry bodies involved in preventing and detecting theft or fraud, could be given access to your data in accordance with data protection law.

Although smart meters send meter readings to your energy supplier, they do not store your name, address or bank details.

How do smart meters work?

Smart meters come with a display device to track how much energy is being used more accurately. It sends readings automatically to suppliers, meaning customers are less likely to underpay or overpay for gas and electricity.

Some energy suppliers offer specialist tariffs which vary the cost of electricity throughout the day. Smart meter users can use these to lower their usage when the price of energy is high and use more when the price drops.

However, for most users, tariffs operate in the same way as a traditional meter. Champions of smart meters claim that the ability for a household to see how much energy it uses will change habits.

Can you refuse a smart meter?

Smart meters are not mandatory and billpayers can refuse to have the devices installed, and you can do this indefinitely.

However, energy companies can force customers to replace their current meter if it is deemed a safety hazard or is no longer functioning correctly.

Consumers who already have a smart meter can ask for the device to be removed at any time. However, suppliers can charge customers a fee to cover this cost.

How much does it cost to leave appliances on standby?

How much energy am I wasting?

Many do not realize how much it costs to leave appliances on standby, according to energy firm Utilita. On average, British homes have 10 unused items plugged in and switched on at any one time. Three in 10 have electrical gadgets on standby despite not using them for more than a year.

A TV costs one household £16 of electricity, while a printer or scanner can add £6.50. The amount per appliance is relatively small, however, this quickly adds up when multiple appliances are left on.

Smart meters give households more accurate data on how much their own home is using. Proponents of the devices claim that gives customers more information on usage and ultimately saves money and energy.

This article is kept updated with the latest information.