“Journalism Is Dying” In The U.S.: It’s Now Government-Controlled Propaganda 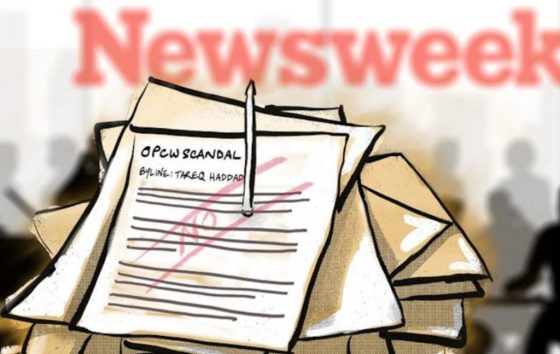 Former Newsweek reporter Tareq Haddad has finally clearly stated what logical human beings have known for quite some time: Stories that challenge establishment’s official narratives go unreported because the media has been co-opted by the United States government.

Which means this country is no better than China or any other dictatorship with state-sponsored media that pushed propaganda designed to keep the establishment in power. According to a report by RT,  Haddad announced his resignation from Newsweek last week, claiming that his editors had shot down his attempt to report on a leaked email which casts doubt on the OPCW’s findings regarding an alleged chemical attack in Douma, Syria, in April 2018.

And THIS story is wildly underreported thanks to the U.S. government, which “has its tentacles in every part of the media.”

Ignoring the merits of the pitch, his editors responded by accusing Haddad of misreporting previous stories that he had worked on. He had previously worked for the Hull Daily Mail and International Business Times. The ex-Newsweek employee offered a scathing indictment of western media:

The US government, in an ugly alliance with those [that] profit the most from war, has its tentacles in every part of the media—imposters, with ties to the US State Department, sit in newsrooms all over the world… Inconvenient stories are completely blocked. As a result, journalism is quickly dying. America is regressing because it lacks the truth.

A new batch of leaked documents, released by WikiLeaks on Saturday, has corroborated the allegation that the OPCW suppressed and altered key findings in its final report on the Douma incident.  That incident leads to violence and state-sanctioned attacks by the U.S. and others with little evidence, even at that time, that warranted such destruction.

There is no better time than now to wake up and understand what’s been going on.  The problem stems from one superstition and the nature of government itself. In Larken Rose’s book
Most Dangerous Superstition

, the author points out that it’s just one false belief that is keeping most of humanity enslaved. The primary threat to freedom and justice is not greed, or hatred, or any of the other emotions or human flaws usually blamed for such things. Instead, it is one ubiquitous superstition that infects the minds of people of all races, religions, and nationalities, which deceives decent, well-intentioned people into supporting and advocating violence and oppression. Even without making human beings one bit more wise or virtuous, removing that one superstition would remove the vast majority of injustice and suffering from the world.
In the book, Against the State: An Anarcho-Capitalist Manifesto author Llewellyn H. Rockwell Jr.

diagnoses what is wrong with the American political system and tells us what we need to fix things. The cure is a radical one because, as the book incontrovertibly shows, the many problems that confront us today are no accident. They stem from the nature of government itself. Only peaceful cooperation based on the free market can rescue us from our present plight.

Read these books while you still can. As freedom of speech is being killed off systematically by the powers that shouldn’t be, it won’t be long before books will be banned so the establishment can maintain some semblance of control over people.