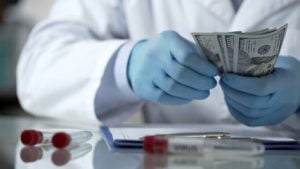 On Monday, the bad news oddly enough was not focused on the mRNA shots, but on the adenovirus jabs.  More specifically, the Johnson & Johnson vaccine. Researchers from the Mayo Clinic in Rochester Minnesota, who published their findings in JAMA Internal Medicine, compared data from the general population before the pandemic to data gathered from reported vaccine side effects suffered by Americans.

The results found that if you have received the J&J COVID-19 vaccine, you are 3.5 times more likely to develop brain blood clots than those who are unvaccinated. (Or, people before the scamdemic).

Blood clots and specifically cerebral venous sinus thrombosis are well-known side-effects of the J&J vaccine, and the discovery of this risk was the reason usage of the vaccine was paused in April. Still, however, the team insists the side-effect is rare and that the findings must be looked at in the context of the effectiveness of the vaccine in preventing severe cases of COVID-19. –ZeroHedge

The data were gathered from Olmstead, County, Minnesota, a county of around 158,000 people situated around 90 miles southeast of Minneapolis, from 2001 to 2015, according to a report by the Daily Mail. Meaning data that was used was collected before they pulled off the hoax scamdemic. They then used the Centers for Disease Control and Prevention’s Vaccine Adverse Event Reporting System (VAERS) to find diagnoses of blood clots in people who received the J&J vaccine between the jab’s approval date at the end of February 2021 to May 7.

We also know that there’s dramatic underreporting going on on the VAERS website, while those pushing the “vaccines” claim “anti-vaxxers” are using it stock fear of the shots. But the comparison of the data determined that the J&J jab isn’t exactly “safe.”

During the 14 years before the pandemic, there were only 39 Olmstead residents who developed CVST – a rare, potentially deadly, blood clotting condition. However, after the jabs were being used to treat COVID, that number shot up to 46 reports of CVST confirmed in the VAERS program following patients’ who received J&J jabs.  Although eight were eventually removed from that pool for either being duplicate reports or not being professionally diagnosed. In total, 38 cases tied to the J&J vaccine were detected, with over 70% being among women.

Perhaps it’s just a coincidence, but further studies might be warranted. Will those studies happen? And if they do, will they be censored and banned from public scrutiny?

The other horrifying “raw deal” is that those who got the J&J jab are already being told they also need boosters. One shot and done wasn’t enough, apparently.