Japan Will Soon Start Testing The Feasibility Of A Space Elevator 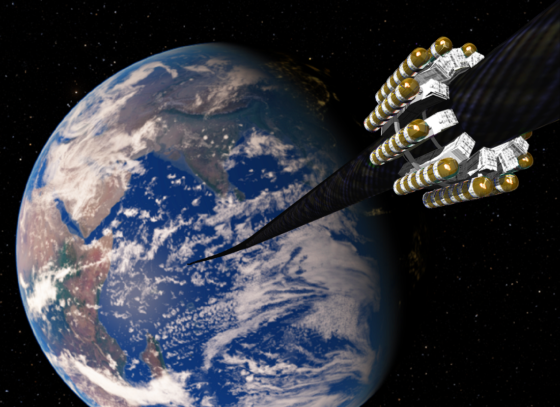 Japan is about to begin their initial testing on the feasibility of a “space elevator.”  In lieu of rocket launches, the research team seeks to find out if using an elevator to get to space is even possible.

On September 11, a team from Shizuoka University’s Faculty of Engineering will be launching a scale model of a space elevator into Earth orbit: two small cubic satellites just 10 centimeters (4 inches) per side, connected by a 10-meter (33-foot) steel cable, according to Science Alert.

A Japanese construction company named Obayashi Corp., which is working with Shizuoka University and has previously announced that it hopes to get a space elevator operational by the year 2050. This would include a space station in geostationary orbit at an altitude of 35,000 kilometers (22,000 miles) and a tether in the Pacific Ocean.

Engineers have been dreaming of a space elevator for over 100 years, ever since Russian scientist Konstantin Tsiolkovsky came up with the idea after seeing the Eiffel Tower in 1895. The technology has made multiple appearances in science fiction since.

The technical challenges involved in implementing a space elevator are not minimal, however. For starters, it would need to be constructed of a material that’s light enough not to collapse under its own weight. This material would also need to be strong enough to withstand the tension induced by the centrifugal force acting on the elevator’s counterweight, way beyond Earth’s atmosphere (in space), to keep the elevator upright. The material would also have to withstand the gravitational forces from Earth, the Sun, and the Moon, as well as the stresses induced by Earth’s atmospheric conditions, such as strong winds.

It is still a far cry from the ultimate “beam-me-up” goals of the project, which builds on a long history of “space elevator” dreams. But that’s what keeps researchers moving. “In theory, a space elevator is highly plausible,” Shizuoka University engineer Yoji Ishikawa said. “Space travel may become something popular in the future.”