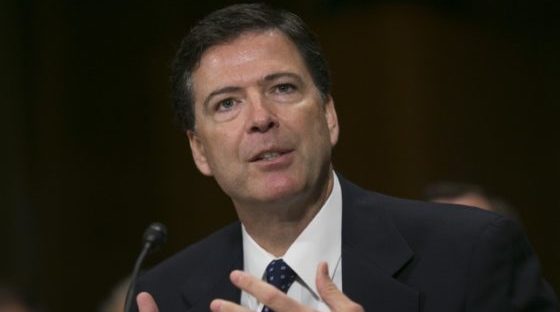 Former FBI director James Comey, who was fired, said during a question and answer session that there is no deep state right before describing the existence of the deep state perfectly. He simply called it a “deep culture” instead.

The context, as reported by Twitchy, was a question about what would happen if Trump were to fire special counsel Robert Mueller. Comey was specifically addressing whether those under Trump would adhere to such an order or not. “I don’t know. That’s a really interesting question,” Comey begins. “I think there’s an argument to be made that it would be utterly ineffective in practice.” And why, exactly would it be “ineffective” for Trump to fire Mueller? Because of the deep state, wait…no…the “deep culture.”

“You’d have to fire the entire FBI and the entire justice department for two reasons,” Comey says.  The first reason is that Comey doesn’t think Trump could find an executive willing to carry out the order to fire Mueller. And the second reason firing Mueller would be ineffective is because of the “deep culture.”

“There is no deep state, but there’s a deep culture and commitment to the rule of law that runs all the way down through not just the Department of Justice and the FBI but the military services and the intelligence community. It would be interesting to see what would happen next,” Comey said.

Comey: Firing Mueller could be "utterly ineffective" because there is a deep culture of commitment to the rule of law in the FBI pic.twitter.com/gKhQAzjZCA

So basically, there is no deep state, but there’s a deep culture that would try desperately to stop Donald Trump from firing Robert Mueller.  Thanks for the clarification, Comey.

It is absolutely fascinating that Comey described what he just previously said didn’t exist. But we all remember who Comey really is: the deep state puppet who let Hillary Clinton off the hook.

The letter reveals specific edits made by senior FBI agents when Deputy Director Andrew McCabe exchanged drafts of Comey’s statement with senior FBI officials, including Peter Strzok, Strzok’s direct supervisor, E.W. “Bill” Priestap, Jonathan Moffa, and an unnamed employee from the Office of General Counsel (identified by Newsweek as DOJ Deputy General Counsel Trisha Anderson) – in what was a coordinated conspiracy among top FBI brass to decriminalize Clinton’s conduct by changing legal terms and phrases, omitting key information, and minimizing the role of the Intelligence Community in the email investigation. Doing so virtually assured that then-candidate Hillary Clinton would not be prosecuted. -Zerohedge