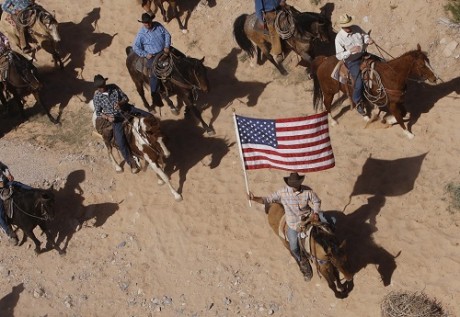 Update: All four individuals have now surrendered; there was a minor incident involving the surrender of David Fry. The Washington Post reports:

On Thursday morning, three of the four people surrendered without much incident, but on a telephone call from inside the refuge broadcast to more than 31,000 listeners on YouTube, a man identified as David Fry insisted that he would not come out “unless my grievances are heard.”

At the ranch, meanwhile, had been reports that the occupiers would surrender at 8 a.m. here, but that time came and went with no sign of movement at the refuge. By 10 a.m., the livestream solely focused on an extended argument and negotiation involving Fry.

Fry at one point claimed “I am not coming out,” but was eventually convinced to do so:

The Feds are now everywhere surrounding the Malheur Wildlife Refuge. It appears that the final, and potentially tragic, act of the standoff is underway.

Things are coming a head for the four final holdouts inside the building has hosted an occupation against federal land claims for now more than a month.

Hopefully things will remain peaceful. But there is every chance that sparks could fly instead.

Cliven Bundy, father Ammon and Ryan Bundy who were arrested for their role in leading the Oregon standoff, was en route to the Malheur Wildlife Refuge along with Nevada State Assembly member Michele Fiore to negotiate the peaceful surrender of the four left inside – who agreed to walkout and surrender with Bundy and Fiore there.

Cliven Bundy also called for patriots and militia to join him over the last several hours, issuing a statement on Facebook: 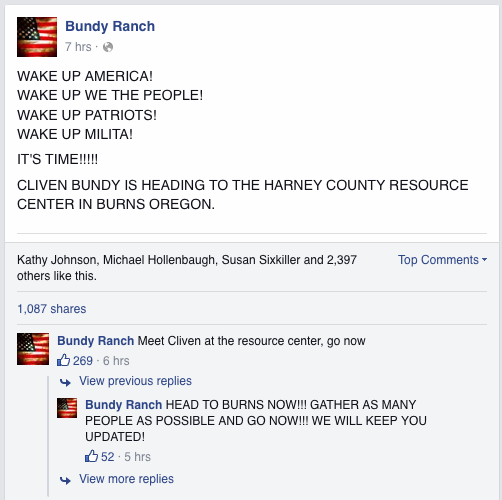 But now, Cliven Bundy was arrested at the Portland airport just hours ago on “conspiracy and weapons charges“, making the resolution of the situation uncertain:

Nevada state Assembly member Michele Fiore, a Republican supportive of the protesters, identified herself over the broadcast as she talked with the occupiers via telephone. She said she was in Portland waiting for an FBI escort to Malheur, roughly 300 miles (480 km) to the southeast, in order to help broker a peaceful resolution to the standoff.

[Bundy attorney Mike Arnold stated] “I’m sort of in frustrated disbelief right now that there’s someone in the federal government right now who thought it was a good idea to arrest Cliven Bundy while (Nevada State Rep.) Michele Fiore was negotiating for the stand down at the refuge.”

“If Cliven Bundy can get arrested peacefully without force or violence, then the four remaining at the refuge can feel confident they can walk out unharmed,” [Arnold] said.

Meanwhile, it appears that the FBI and other affiliated agencies have strategized their own resolution to the situation, and are moving in agents up to the point of the barriers, positioning snipers and readying crowd control resources.

Unofficially, a martial law atmosphere has descended upon the Eastern Oregon area.

The FBI said the latest confrontation began after one of the protesters was seen riding an all-terrain vehicle […] outside the barricades previously set up by the self-styled militia members at the refuge.

FBI agents attempted to approach the driver, and he sped away back to the compound, after which federal agents “moved to contain the remaining occupiers by placing agents at barricades both immediately ahead of and behind” their encampment, the FBI said.

The militants said FBI agents had moved to within 50 yards (45 meters) of the occupiers’ position in the compound, and one reported seeing FBI snipers on a nearby hillside with high-beam vehicle lights trained on the compound.

“If they tear gas us, it’s the same as firing on us,” said one of the occupiers, who identified herself as Sandy Anderson. “Don’t come in. Don’t do it.” […] “We’re not leaving without our weapons.”

The Feds are portraying their actions as a peaceful, but necessary means to force the situation to a conclusion.

In reality, it is an skittish move that could make someone jumpy or trigger happy, and federal agents proved prone to violence in apprehended LaVoy Finicum and the others traveling with him.

By arresting Bundy, the FBI may have been trying to avert further conflict with the people, but may have conversely set themselves up for a Waco/Ruby Ride finale.

None of this provocative behavior is in the interests of patriots protesting federal land grabs. For their part, the incendiary video statement by Sean Anderson – who called for people to shoot FBI and law enforcement and who is still holed up inside – did not encourage a straightforward surrender:

Until Wednesday, FBI and police had largely kept their distance from the buildings occupied by the militants….

“However, we reached a point where it became necessary to take action” to ensure everyone’s safety, Greg Bretzing, special agent in charge of the FBI in Oregon, said in a statement.

For now Sean Anderson, Sandy Anderson, David Fry and Jeff Banta are the four who remain inside Malheur.

They have claimed they would surrender peacefully on Thursday, but that was before Cliven Bundy’s arrest.

.@VoteFiore is now back on the live stream. Sean Anderson says they’re going to turn themselves in tomorrow morning. #Oregonstandoff

Numerous supporters have come to the scene outside of road blocks and staging by federal and state law enforcement agencies. The stage is set for a bloody conclusion; let’s pray that this is not what happens. This reporter has been tweeting out updates from the area as they happen: Tweets by @amandapeacher

7:02 p.m  An individual identifying as Burns mayor Craig LaFollette is talking over the phone with the occupants. He says they are sending a “specialist” negotiator out to the standoff.

Not much is visible from the blockade except the lights from the FBI base. There’s a dense fog hovering over the valley. Spooky.

Explosive Interview: I Just Got Off The Phone With Ryan Bundy And You Won’t Believe What He Told Me!