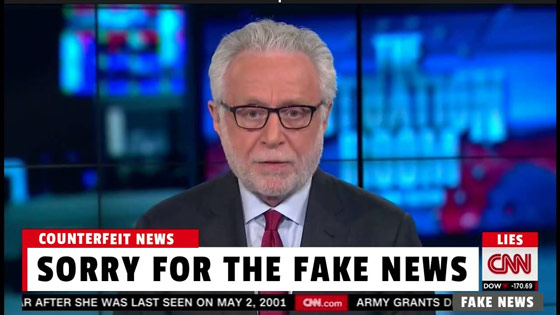 This report was originally published by Dawn Luger at TheDailySheeple.com

It’s over for CNN. The media giant has been busted using propaganda and false narratives to promote an “anti-Trump” agenda. Even Alex Jones is calling on the White House to revoke CNN’s press credentials.

For once, “conspiracy theorists” don’t sound like looney birds. Alternative media outlets like The Daily Sheeple have been on the ball calling out CNN for their obviously biased reporting, and if you haven’t noticed it until now, you’re one of the ones successfully brainwashed during their intentional misinformation and propaganda campaign.

In a new undercover video, a CNN producer is caught on camera saying the infamous “Russian hacking” narrative was a lie and pushed for ratings. Still don’t believe the media is using propaganda on the weakest leaks? Here’s the video by Project Veritas, and the “Russian hacking” lie is not the only admission John Bonifield, CNN’s supervising producer speaks of.

It isn’t like the media hasn’t slipped up in the past and literally told the public that they control what those who tune in think. MSNBC accidentally said that it’s their job to tell people that to think back in February. Anyone assuming MSNBC is somehow better than CNN didn’t see this little spark of truth. The anchors actually told their viewers that it’s their job to control what the public thinks.

The mind control tactics have worked to an extent. The Russian hacking narrative was still dominating headlines regardless of the FACT that there is not a single shred of proof or a smoking gun. And what the mainstream media and CNN conveniently left out for their simple minded lemmings, was the fact that Wikileaks released Vault 7 documents titled “Marble” proving the US (more specifically, the CIA) can hack anything they want and put stamps from any other country on those hacks. This would shift the blame to any country they think they can get away with blaming. Now even if they ever manage to fabricate some kind of proof, it’ll implicate their precious government and the CIA.

Even parody accounts poking fun at Antifa are more credible than mainstream media at this point.

All of a sudden, CNN is making Alex Jones look incredibly credible. Three CNN journalists were also just forced to resign after the network apologized for pushing another fake news story about Trump advisor Anthony Scaramucci being linked to a Russian investment fund. That prompted Jones to ask Trump to revoke CNN’s White House credentials.

Any other news outlet that admitted it created fake news simply to make money and attract eyeballs would be savaged by the rest of the media, put on a blacklist and wouldn’t get anywhere near the White House. –Info Wars

Any American (or foreigner for that matter) who couldn’t see the media’s bias are the very ones who are easily controlled and manipulated by outlets like CNN. Free thinking is rare anymore, and the truth is now treason in the empire built on lies. John Bonifield, even said that CNN had no respect for journalism ethics.

Credibility and honesty and integrity are gone, and it is more likely than not, not just CNN. Fear is a powerful tool, but so is thinking for oneself. Issues like this one the very reasons why people are turning to alternative media. We don’t hide the government’s corruption on this site, and we don’t protect those in the media who use propaganda to brainwash the public.

Contributed by Dawn Luger of The Daily Sheeple.