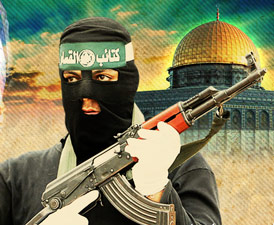 A Friday night in Paris, France turned into a bloody rampage when at least two Muslim men armed with assault rifles left 160 dead and scores wounded. Some reports also indicate that suicide bombers were to blame for multiple explosions heard by witnesses.

A de facto state of Martial Law now exists in France, with mandatory curfews and the country’s borders sealed for the first time since the 1962 Algerian war. Paris authorities also announced a closure of all schools and universities in the French capital. Armored vehicles have been deployed around the city.

This is likely only the beginning for a wave of terror that could sweep the region in coming months and years. With hundreds of thousands of unidentified, fighting-age men having entered European borders in the last six months, the zones’ citizens from Germany to Hungary are, quite literally, up in arms.

In October we reported that Europeans were scrambling for guns amid the Islamic immigrant invasion and that Austrians were so desperate for personal protection that long guns across the entire country sold out within weeks.

In early November officials reportedly found a weapons cache at a Swedish migrant center, suggesting that citizens panicking to get firearms was completely justified.

Just hours before the Parisian massacre Hungarian Prime Minister Viktor Orban blasted European Union member states, claiming that there is a “master plan” for a political takeover of the continent:

The migrant invasion to Europe from the Middle East and Africa may be part of a left-wing plot to pack the continent with sympathetic voters, Hungarian Prime Minister Viktor Orban has told Swiss magazine dieWeltwoche

Now, Mr. Orban has ramped up his rhetoric, insisting that there is a “master plan” by left-wing activists on both sides of the Atlantic, specifically pointing to “radical American Democrats” for their involvement, and the fact that Western, Judeo-Christian culture is being ignored in the whole debate.

“Nobody has raised the question whether this is about our very existence, our cultural identity, our way of life.

On Thursday EU Commissioner Franz Timmermans warned member states that failure to resolve the immigration issue could realistically lead to war across the entire region.

While the saying goes “good fences make good neighbors,” it appears the leadership of The EU is starting to get frustrated with the lack of acquiescence among some of the ‘union’s’ newer or more marginal members. In a somewhat stunning statement, following ongoing and contentious meetings to discuss solutions to the migrant ‘problem’, EU Commissioner Timmermanns appeared to warn disagreeable member states, “There is an alternative to everything. I believe in EU cooperation because of all other forms in history have been tried to help Europeans get on better, and with the exception of this one, all other forms have led to war – so let’s stick to this one.”

The latest attacks in Paris are not isolated incidents. Thousands of immigrants have disappeared from refugee camps and weapons caches have been found in several locations. A trend of terror may be set to explode across Europe.

This could lead to cultural and religious clashes between Christians and Muslims, and eventually a breakdown of order and civility between member states.

Europe has claimed that they would sit out the next World War.

Ironically, it may once again start on their soil.