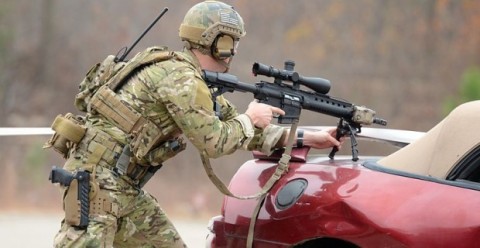 The Special Operations Command for the U.S. Army may be preparing to blend in during its mock engagement of hostile populations in the U.S. Southwest this summer, but first it is going on the offense to counter the claims of “conspiracy theorists” about the true nature of the controversial Jade Helm 15 exercises.

U.S. Army Special Operations Command says that, contrary to reports circulating on conspiracy websites, it has no plans to invade Texas.

Some fringe websites have paraded a PowerPoint presentation, reportedly from USASOC, as evidence of Jade Helm 15, a series of military exercises across California, Nevada, Arizona, New Mexico, Utah, Colorado and Texas. They say it will train the U.S. military to suppress American citizens rebelling in a coming military coup or civil war.

The article singled out reports from Infowars and All News PipeLine, among others stressing concern about the preparations for martial law:

Conspiracy websites painted language regarding civilian impact as revealing of the true nature of the mission: to prepare for abducting dissidents from their homes.

Many of the conspiracy sites have focused in on the selection of Texas as a “hostile” territory. To them, a high degree of libertarian support, pro-gun leanings and patriotism make Texas a target. The slides also mark Utah and a pocket in Southern California as “hostile,” while New Mexico is “uncertain (leaning hostile)” and Arizona is “uncertain (leaning friendly).”

The presentation slides say the area was chosen for its large undeveloped tracts of land and low population density. Texas in particular was chosen as the hub of the operation because it has been traditionally military-friendly, easing the impact or alarm the forces’ presence might impose on localities, according to the slides.

Though disputing any ill intent, the Army Times admits that the Jade Helm drill is real, and that soldiers have trained for the approach – “mastering the human domain” – before.

“the human domain is the totality of the physical, cultural and social environments that influence human behavior to the extent that success of any military operation or campaign depends on the application of unique capabilities that are designed to fight and win population-centric conflicts. It is a critical and complementary concept to the recognized domains of land, air, maritime, space and cyberspace.”

In an apparent predecessor to the drill, officers wrote on the need to project military operations and occupation efforts into the “human domain,” in order to engage the social, political and economic spheres seen as critical for mission success.

It is a technological continuation of the double-edged philosophy of the Pentagon and White House to “win over hearts and minds” over the course of the flawed Vietnam War, a term known in more technical terms as pacification of the population.

It’s focus on mapping the “Human Terrain” – using the expertise and techniques of anthropology – lends credence to the idea that the military are “rehearsing” scenarios concerning how to deal with independent-minded and anti-establishment people living inside Texas and Utah, the “hostile” states identified in the Jade Helm drill. On the human domain:

“What we know and project about the future operating environment tells us that the significance of the ‘human domain’ in future conflict is growing, not diminished,” the service leaders wrote.

One controversial tool to aid in the collection, processing and analysis of information in regards to the human domain has been the US Human Terrain System (HTS) in which social scientists, primarily anthropologists, have been utilised to conduct research and provide analysis to military commanders in support of the military’s operations […] At the height of the programme there were 30 HTS teams in Afghanistan and despite the challenges of the programme, it was widely viewed as providing value […] .

Currently tools such as PMESII (Political, Military, Economic, Societal, Infrastructure, Information)[xxxiv] through to the excel spreadsheet in the British issued human terrain packs can provide valuable tools to begin the collection and processing of human domain information

In short, it utilizes the psyop to persuade the population with co-opted leaders and copious amounts of propaganda and more subtle means of compliance and coercion.

While watchful Americans shudder at the possibilities suggested by these training exercises, those who have been involved in these ‘humanitarian’ occupation campaigns throughout the convoluted and dragged out Aghanistan war have pointed to its profound failures:

“The use of short-term aid and relief programmes as part of counter-insurgency has been ineffectual, and that, in places
such as Afghanistan, it may even have undermined the overall military goal of defeating insurgents.”

After all, the tactic – as its cries of peace play against a backdrop of a military invasion – are as chilling and empty as the words of a Martian visitor repeating “We come in peace” before attacking a stunned and off guard opponent.

What history does teach us it is good for, however, is dealing with dissidents and stifling opposition.

Many of the conspiracy theorists watching the events so closely have suggested that Jade Helm-type exercises are the perfect pretexts for “red list” operations.

Meanwhile, someone caught footage of a drill in Florida wherein military personnel roundup up citizen role-players and loaded them into vans for rendition:

What are they really training for?

Stay vigilant and stay vocal in calling out the unpatriotic use of forces for domestic control.