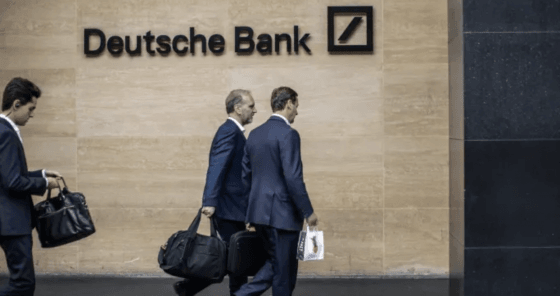 Deutsche Bank (DB) shares have continued to sell-off ahead of the United States market open. They were recently off 5% at a new session low, as the bank’s shareholders have apparently realized that DB won’t be able to return to profitability with no revenue.

Some readers might have dismissed warnings of “Lehman-style” scenes outside Deutsche Bank’s global offices as hysteria related to the bank’s restructuring. But the mass firings that will eventually cull some 18,000 employees, roughly 20% of the bank’s global workforce, have already begun.

After announcing the bank’s most radical restructuring plan in two decades, CEO Christian Sewing on Sunday revealed that the bank would immediately move ahead with the steep job cuts. On Monday, whole teams of equity traders in Tokyo and the bank’s other Asian offices were let go, the first step toward winding down the bank’s equities sales and trading operation. The bank is also planning cutbacks to its fixed income, and rates, trading business. Shares bounced in pre-market trading on Sunday, but have since turned lower; in recent trade, DB shares were off nearly 2%.

Though DB didn’t disclose the regional breakdown of the job cuts, it’s widely believed that roughly 50% of the employees in its bloated investment bank will be let go. That would mean the bank’s offices in New York and London will be the hardest hit.

One Singapore-based employee whose team had not been hit by the cuts told the FT on Monday: “The mood is always depressed in Deutsche.”

The FT said DB staff working in London will receive “notification risk” notices, effectively a warning that they might soon be fired, offered a ‘consultation session with HR, and then given the rest of the day off.

“People know the bank is not doing well…It’s not like a party…This is really sad what is going on right now in the bank, but I guess from top management’s point of view that is what is needed to be done,” said one Deutsche staff member in London who declined to be named.

As a reminder, here are the highlights of the “radical transformation” as published by the bank:

The layoffs come as DB refocuses on its core European corporate business, while also planning to package some €74 billion in derivatives into a ‘bad bank’. Most of the job cuts will land outside Germany, partly because Germany’s powerful unions will shield employees from the ax. The bank has committed not to fire any German retail employees against their will until mid-2021, and since 2017 it has been reducing headcount through natural attrition.

One fund manager in Germany described CEO Sewing’s cuts as “a crash diet” to help the bank get back in shape, adding that the steps are long overdue.

As the cuts begin, one staffer warned: “it is going to be carnage” inside the bank’s London office on Monday.