It WOULDN’T Take Much: Markets COULD IMPLODE!

National polls will tell you which candidate has more support in general, but in the U.S., each and every citizen does not vote on a national level, but on a state-by-state level. In other words, if one resides in California, they will influence which candidate will win in their state alone.

This might create a situation where the popular vote, which is the candidate who gets the most total votes, does not become president.

This system, where each resident can only influence locally, is called the electoral college, and it is only practiced in the United States, even though surveys show that between 60% and 80% of Americans don’t approve of it.

WHAT IS UNIQUE ABOUT THIS WAY OF CHOOSING A POLITICAL LEADER?

Each state also gets to send two senators to the Senate.

Here’s how this works in real life: in Texas, there are just over 25M residents, so it has 36 congressmen in the House. A state like Vermont is tiny, with less than 650,000 residents, so it has one congressman. The way the electoral college works is Texas gets 36 votes for each congressman and two for its Senators, so it’s worth 38 votes in Tuesday’s elections, compared with Vermont’s 1 congressman + 2 Senators, which gets them 3 votes on Tuesday.

This is just one example. What this does is make it so that each vote is not equal to another due to the number of residents each delegate ends up representing.

In 2016, in New York, a blue state, 2.8M people voted for Trump, but since Hillary got 4.5M votes, those people’s political opinions got buried.

This system goes back to the early part of the United States when it made more sense, but it seems to be inefficient for the 21st century. 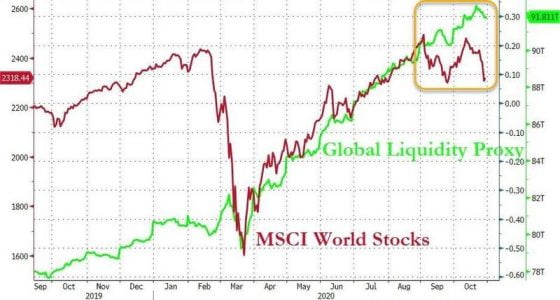 Back to the markets, we can see that as hedge fund manager David Einhorn says, fundamentals have begun mattering since September 2nd because liquidity isn’t enough to move prices higher anymore.

Be on the lookout for our special PRESIDENTIAL UPDATE Tuesday AM!