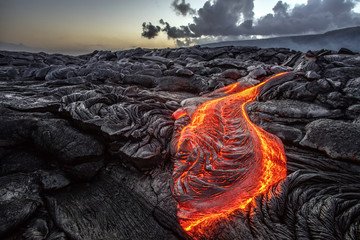 The Mauna Loa volcano is picking up the pace when it comes to volcanic activity. Scientists have begun monitoring the Big Island volcano, just in case, it could erupt violently.

Mauna Loa is impressively close to Kilauea, the volcano which erupted for weeks last May. An eruption last year by Hawaii’s Kilauea volcano destroyed more than 700 homes from May through August. Kilauea’s current alert status is “Normal,” but the landscape around the volcano has been permanently altered, creating 250 acres of new land.

The Hawaii Volcano Observatory is closely monitoring Mauna Loa because conditions have risen to levels comparable to a more active period between 2014 and 2017, The Hawaii Tribune-Herald reported Sunday.

According to Tina Neal, the observatory’s scientist-in-charge. “An eruption could be anywhere from months to years away,” Neal said. “But we do know that it’s not days or weeks away.” Either way, Neal does not believe Hawaii is in immediate danger of another destructive volcanic eruption.

The activity of concern is an increase in earthquake activity. Earthquakes on Mauna Loa dropped to less than five per week in early 2018, but there have been up to 90 earthquakes weekly since August, with most considered mild at 2.0 or less on the Richter scale, Neal said.

“The most important thing is that there is no cause for alarm,” Neal said, according to a report by Hawaii Public Radio.

The Kilauea eruption came shortly after a decrease in volcanic activity at Mauna Loa, but Neal said there is no “perfect correlation” between the volcanoes indicating one always becomes active as the other falls silent. But there was a 5.3 magnitude earthquake near Kilauea and Mauna Loa, according to the US Geological Survey (USGS). Kilauea is on the opposite side of the island to the epicenter of the earthquake, which happened Sunday.

The USGS said the earthquake’s epicenter was about eight miles (14km) northwest of the town Kalaoa. The tremor occurred at a depth of about eight miles, however, that’s not particularly deep for an earthquake of this magnitude. The USGS further said that the volcano has returned to “green normal.” which means the “volcanic activity has ceased and volcano has returned to noneruptive background state,” according to The Express.

The best way to prepare for a possible volcanic eruption is to have a “bug out bag” ready, full of essentials, and have a place you can get to in a hurry. Most volcanoes are unpredictable and a situation can change quickly.  Being ready beforehand will give you the survivalists edge.