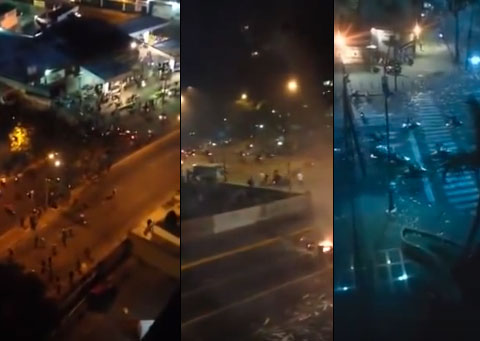 Editor’ Note: The initial report about this incident was printed in error. While the videos and images below were believed to be recently recorded, several readers contacted us to report that these incidents occurred in February 2014 and not February 2016.

We have modified portions of this article but have left the majority of this report intact. In terms of possible responses and consequences of economic collapse in the United States, Europe and elsewhere, the events in Venezuela could happen anywhere when governments lose control of the populace.

Venezuela is in complete chaos as a result of their economic collapse.

And as a result, state-rationed food and groceries have run out, prices are hyper-inflated and millions of people are waiting in huge lines for any goods that are available. Black markets have gone boom, with neighbors making necessities available to other neighbors, but they must avoid crackdown from a jealous State that is desperate to hang onto power.

The free-fall of oil prices on the global stage has snapped the South American socialist nation into sudden and harsh disaster. Venezuela has slightly more oil than Saudi Arabia, and trades the second largest volume, after OPEC, and was even more vulnerable than Russia to the economic warfare that has taken place in the last few years.

Things are very bad now, and they were already falling apart. Nicolas Maduro took over after Hugo Chavez’ death in 2013, but without the force of Chavez’ cult of personality, he has been unable to hold an already unrealistic economy together any longer – and the people are on the verge of complete revolt.

*Editor’s Note: The following reports were taken in 2014 but are as relevant to the conversation today as they were then*

This is what happened to dissenters and so-called agitators in collapsing Venezuela… Could the same be coming to America?

With state control of the media in Venezuela, and an unwillingness to report on the part of the international press, it is difficult to know all the facts. Indeed these developments have gone virtually unreported, but some of it has surfaced on YouTube.

The Caracas Chronicles is one of the rare sources to report what is really happening:

What we saw were not “street clashes”, what we saw is a state-hatched offensive to suppress and terrorize its opponents.

Throughout last night, panicked people told their stories of state-sponsored paramilitaries on motorcycles roaming middle class neighborhoods, shooting at people and  storming into apartment buildings, shooting at anyone who seemed like he might be protesting.

People continue to be arrested merely for protesting, and a long established local Human Rights NGO makes an urgent plea for an investigation into widespread reports of torture of detainees. There are now dozens of serious human right abuses: National Guardsmen shooting tear gas canisters directly into residential buildings. We have videos of soldiers shooting civilians on the street.

And that’s just what came out in real time, over Twitter and YouTube, before any real investigation is carried out. Online media is next, a city of 645,000 inhabitants has been taken off the internet amid mounting repression, and this blog itself has been the object of a Facebook “block” campaign.

The crack down on the population of Venezuela is truly massive and very chaotic, as much of the footage shows.

Raw footage on YouTube (warning: some footage is graphic):

Is this how things will go down in the United States in the aftermath of the planned collapse of the economy and the destruction of the American standards of living?

Though Venezuela seems world’s apart from the events in the United States, this same level of unrest can grow quickly along the lines of division that have been sharpening under President Obama’s two terms and the false “recovery” imposed by bankers intent on bringing everyone to their knees.

For now, the biggest difference is that Americans still have their guns, and the militia are still of, by and for the people.

Venezuela Enforces Fingerprint Registry to Buy Groceries: What to Do Before Rationing Starts in America