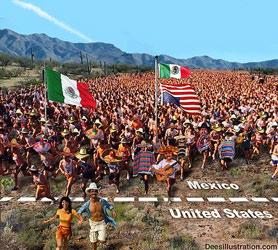 In recent weeks tens of thousands of illegal immigrants have flooded the southern border of the United States. So much so that border patrol agents are overwhelmed to the point where security along the Rio Grande river has become virtually non-existent. Instead of making arrests, detaining and deporting those who cross into America illegally, many immigration agents are reportedly mixing baby food and changing diapers for children left displaced by parents who’ve abandoned them in the hopes their kids would find greener pastures in the U.S.

The inaction on the part of the Federal government has left many bewildered. Some insiders at Immigration and Customs Enforcement (ICE) have even gone so far as to suggest that the entire situation has been orchestrated by the Obama administration in an effort to increase their voter base ahead of the upcoming national elections this year and in 2016. That allegation may have seemed ridiculous to supporters of amnesty legislation and immigration reform, who argue that allowing immigrants into America is a humanitarian issue.

But a new legislative proposal from Democratic Senator Guestavo Rivera of New York may have just proven that opponents of lax border policies have a legitimate concern as it relates to diluting the Conservative and Libertarian voter block, as well as the burden of more government spending to accommodate the influx of people requiring assistance.

If passed, the new law would give illegal immigrants the right to not only vote in local and state elections, but they’d also enjoy many of the taxpayer funded benefits available to American citizens.

In terms of the broad benefits available to non-citizens, this bill is the first of its kind in America.

The main objective of the New York Is Home Act, according to Rivera, is to integrate illegal immigrants, who are estranged from participation in civic, economic and political life.

The legislation not only gives illegal immigrants the right to vote, but establishes a kind of second-tiered citizenship on a state level, in which illegal immigrants can apply for tuition assistance, health insurance and driver’s and professional licenses, among other benefits.

“It’s mind-boggling,” says Michael Olivas, a professor at the University of Houston Law Center who specializes in immigration law, according to Businessweek. “I don’t believe there’s ever been a serious attempt to codify so many benefits and opportunities.”

The chances of such a law passing in the first go-around are pretty slim and even Rivera says that it’s only a first step. But the move reveals the end-game for Democrats who will no doubt push for similar legislation on a Federal level and throughout State Capitols across the country. Amid heavy criticism of President Obama’s foreign policy, continued degradation of the national economy, and the continued failure of promises to improve equality among the working class, the Democrats are quickly running out of options and run a serious risk of losing political control on every level of government.

They’ve come to the realization that their only option at this point is to offset the the losses in their voter base. And what better way to do that then to open the borders to hundreds of thousands of new voters to whom they can pander with free food, health care, and even voting rights?

While Homeland Security and domestic intelligence agencies monitor the activities of American citizens and militarize local police forces under the pretext of safety, we now have a pretty good idea as to why our southern border has been left completely unprotected.

“In politics, nothing happens by accident. If it happens, you can bet it was planned that way.” – Franklin D. Roosevelt