If You Are Calling Out Russia’s War Crimes But Ignoring The West’s, You’re Part of the Problem 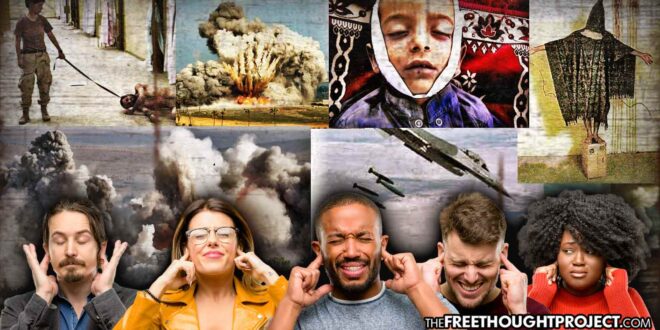 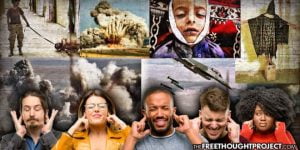 Currently, in Ukraine, Russian President Vladimir Putin is carrying out atrocious acts of war in which 1,400 men, women, and children have been killed. Millions of Ukrainians have lost their homes, and their careers and have been displaced — turned into refugees, overnight. Many parts of the country have been reduced to rubble and it will take years to rebuild — even if the war ended tomorrow.

On top of the 1,400 deaths, another 2,000 have been injured and that list is growing by the day. By all definitions, Vladimir Putin is a war criminal. This much is clear and most everyone would agree. Rightfully so, millions of people are demanding justice for Ukraine.

Last month, President Joe Biden called Putin a war criminal, and as pointed out above, this is correct. But if Biden were truly interested in accountability for war criminals, he would turn himself in to the International Criminal Court in The Hague, for immediate prosecution.

But Biden is not interested in accountability and the US, just like Russia, does not recognize the jurisdiction of the ICC. This is because justice is not the point, demonization of Russia and out political enemies is the point.

The propaganda behind the well-deserved demonization of Russia is so thick that it has blinded the West from seeing the very well-documented war crimes committed by their own governments.

Journalist Julian Assange pointed out some of these war crimes by releasing the “Collateral Murder” video through WikiLeaks. We had video evidence of the United States targeting and murdering civilians — including two Reuters journalists — and the only one who’s been arrested is Assange, who has been tortured in isolation for years for exposing these crimes.

If the West were truly concerned about war criminals we would have already arrested Bill Clinton, George W. Bush, Barack Obama, Donald Trump, and Joe Biden. Every single one of these people have overseen the wholesale slaughter of over a million people, nearly half of whom were innocent men, women, and children.

If we care about the Russian invasion of Ukraine, we must also care about the US invasions, occupations, and aerial warfare programs carried out in Iraq, Afghanistan, Syria, Yemen, Somalia, Libya, and Pakistan.

If we are concerned about the 4 million displaced refugees from Ukraine, certainly we must be concerned with the 39-59 million refugees created by US foreign policy in the post 9/11 interventions, invasions, and occupations of Afghanistan, Iraq, Pakistan, Yemen, Somalia, the Philippines, Libya, and Syria.

If the West demands Hungary be ejected from the EU for having diplomatic relations with Russia during the invasion, then we must also be concerned with the support, logistics, and weapons given to Saudi Arabia as they lay waste to Yemen with US bombs, killing thousands of innocent children and displacing millions more. Not to mention, the US sanctions on Yemen are facilitating a mass genocide, starving hundreds of thousands of civilians — mostly children — to death.

If we are concerned that Russia is intentionally targeting civilian infrastructure — a war crime — we must also be concerned with the villages, schools, hospitals, and cities the US has turned to rubble since 2001.

We know exactly who is responsible for all of these war crimes and instead of moving in to arrest them, we build them statues, libraries, and airports.

Since 2001, hundreds of thousands of innocent civilians have been murdered by US puppets in the White House. These puppets even admit it and instead of accountability, they are celebrated.

Instead of trials or prison time, these mass-murdering psychopaths retire to their million-dollar mansions as those who expose their war crimes rot in prison like Julian Assange and Daniel Hale.

If anyone attempts to point out this hypocrisy on a massive scale, the majority of Americans — who claim to be against war criminals — accuse those individuals of engaging in “whataboutism” and supporting Russians. It is absolute insanity, yet it has become status quo.

The bottom line is that what’s happening in Ukraine right now is a travesty. Innocent people are suffering and it is unacceptable. War is the plight of mankind and should be avoided at all costs. Unfortunately, however, when a physical conflict or war breaks out, it is always preceded and accompanied by psychological attacks, in the form of propaganda which helps to start it and keep it going. These psychological attacks are usually carried out against the citizens of the country who engage in the war, or who profit from the war.

The propagandists involved in the Ukrainian crisis have been in a full-court press well before the first shot was fired or border crossed. Americans were bombarded with conspiracy theories about Russian false flags before the invasion and they have been bombarded with false stories taking place after it began. The result of such a massive propaganda campaign has ushered in a new era of McCarthyism.

The Ukrainian people are being used as cannon fodder for US imperialism and most Americans are completely oblivious — opting for a Ukraine flag emoji and obstinance instead. Unfortunately, this is nothing new and has long been a function of empires. As Chris Hedges reminds us:

The mass slaughter of industrial warfare, the failure to hold ourselves to account, to see our own face in the war criminals we condemn, will have ominous consequences. Author and Holocaust survivor Primo Levi understood that the annihilation of the humanity of others is prerequisite for their physical annihilation. We have become captives to our machines of industrial death. Politicians and generals wield their destructive fury as if they were toys. Those who decry the madness, who demand the rule of law, are attacked and condemned. These industrial weapons systems are our modern idols. We worship their deadly prowess. But all idols, the Bible tells us, begin by demanding the sacrifice of others and end in apocalyptic self-sacrifice.

Are you willing to blindly support war to the point of apocalyptic self-sacrifice or are you willing to admit that all war is hell, not just the ones you’re told to care about? Will you see this blind spot and realize that maintaining this hypocrisy is marching humanity off of a cliff? Or, will you continue to be part of the problem and ensure our mutual demise because the television told you that “Russia bad”?