If Uncle Sam were a real person, would you lend him any money? 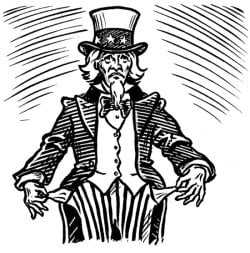 It’s simple math, and we don’t even need to replace the letters with numbers to understand how it works.

In his article The Impossible Math of Debt Backed Moneyâ€¦ and why we WILL take an Evolutionary Step Forward! , Nathan substitutes these letters with the government’s massive debt burden and income (tax revenue).

You don’t have to be an economist to realize that we have a serious problem.

If you combine the amount the Treasury spent directly on interest in 2009, $383 billion, and add it to the $1.5 Trillion used to keep rates low, then it can and should be said that the Treasury actually spent at least $1.88 Trillion on interest!

How much money did the Federal Government take in? $2.2 Trillion is all. Remember, comparing debt or interest to GDP is a FALSE argument, a Red Herring. Income is the only thing that matters when it comes to carrying debt.

Have you ever been trapped by logic? When this happens to your brain, it will know it. Oh sure, you may try to weasel your way out, but deep inside you will know youâ€™ve been had.

To those who think this can reverse or that it was a one-off expenditure, you simply do not understand the exponential growth that is occurring, nor will you see the parabolic collapse that is coming.

That chart spans more than the past century and is experiencing a classic parabolic blow off move that has gone quite vertical. Parabolic moves ALWAYS collapse, it is just a matter of when. When this curve collapses, it is going to be very painful for many people indeed.

Looking at that chart, is there anyway possible to believe the budget forecasts stating that the deficit is going to start coming down soon? What would that mean to the economy if it really happens at this point? Would the economy still be growing or would it be shrinking? Are those light bulbs I see coming on? Pretty illuminating isnâ€™t it?

Okay, now weâ€™ve seen that our outlays (spending) are skyrocketing, letâ€™s take a look at the collapse of current receipts, again our nationâ€™s income, but this time letâ€™s view it in terms of year over year change. Here you will see a historic collapse of tax revenue on the Federal level:

If that math doesnâ€™t convince you that change is about to come to our monetary system, then nothing will! Remember the housing bubble? â€œReal estate never goes down,â€ remember? I was one of the few who was warning about it early on, but now everyone seems to think they saw it coming. Do you see this coming as well? Or, do you believe that itâ€™s possible to â€œinflate away debtâ€¦â€ even though your money is backed by debt?

YES, absolutely the rules are going to change, thatâ€™s exactly what Iâ€™m saying. But Iâ€™m also saying that the rule changes will not be simply printing money within the same old framework.

Unlike a regular individual on the street, the government doesn’t need to worry about debt load, income and interest payments. As is evident from the above charts, rather than decreasing spending, we are actually increasing it. And why not? Our Vice President as well as some (most?) members of Congress believe that we are not going to save our way out of recession, we must spend our way out!

How long can the charade go on? Perhaps it will go on for many years to come, or maybe it’s finally that time when the rest of the world realizes that we are broke, we don’t produce enough income, and we can’t make our payments without printing phantom money out of thin air.

IfÂ  Uncle Sam were a real person, would you lend him any money?