If The U.S. Economy Is So Great, Why Are So Many Workers MISERABLE? 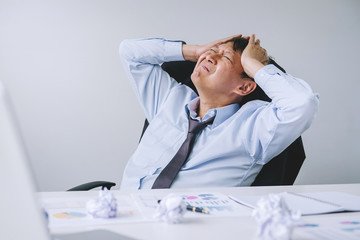 Millennial and generation Z workers are becoming increasingly miserable with their jobs and careers. Since we are told several times a day by the media that the economy is booming, why are so many young workers so disastrously melancholy all the time?

The mental well being of the American worker hit an all-time low in 2018, according to a report by Barron’s. That’s a bit shocking considering the economy is booming and wages are rising, right? Well, wages aren’t rising that much, and much of the consumer spending is being put on credit cards, creating a vicious cycle of depression and consumerism that will repeat for a lot of folks.

So why are we constantly being told everything is fine? The mainstream media loves to say that the U.S. is nearly ten years into one of the longest economic expansions in history, unemployment is the lowest it’s been in almost half a century, and employees have more job choices than they’ve had in years. But there’s just one problem.  That’s not actual truthful when taking all of the data into consideration. Sure, unemployment is low the way the government calculates it, but there’s a reason for that.  102 million Americans are no longer “in the workforce” and therefore, unaccounted for. Michael Snyder, who owns the Economic Collapse Blog says: “Sadly, the truth is that the rosy employment statistics that you are getting from the mainstream media are manufactured using smoke and mirrors.”

But you have to add both of those categories together to get the total number of Americans that are not working.

In both cases we are talking about Americans that do not have a job.  It is just a matter of how the federal government chooses to categorize those individuals. –Michael Snyder, The Economic Collapse Blog

That could partially explain the misery some are feeling, but those who have jobs aren’t happy either.  They are often reeling from student loan and credit card debt.  Being depressed makes shopping feel like a solution, but when the bill comes, the depression once again sets in making this a difficult cycle to break for so many just trying to scrape by.

Depression and suicide rates are rising sharply and other than putting the blame on superficial issues, researchers are at a loss as to the real reason why.  But could it possibly be that as the elite globalists continue to take over the world and enslave mankind, people are realizing that they aren’t meant to be controlled or manipulated, but meant to be free?

There’s something we are all missing all around the globe.  Could it possibly be free will and a life of freedom from theft and violent coercion and force that’s missing?