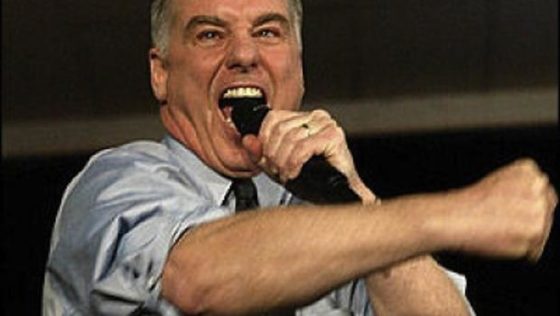 After Gab was taken down in response to Robert Bowers’ presence on the social media platform, former DNC chairman Howard Dean—now chairman emeritus—tweeted the following:

You are a facilitator of neo nazis and other haters. You should be tried for being an accomplice to murder. You’re lucky shutting you down is all you get. A lot luckier than the 11 Jews in Pittsburgh were or the two African Americans murdered in Kentucky were. https://t.co/BjJyTbP4dC

Both the Democrat and Republican parties—actually two faces of a single party—continue to facilitate illegal and immoral wars, killing far more innocent people than Robert Bowers.

Dean has long been an advocate of crimes against humanity. Back in 2003 when he was a failed presidential candidate, Dean was asked “whether his views are closer to the dovish Americans for Peace Now (APN) or the right-wing, Sharon-supporting American Israel Public Affairs Committee (AIPAC),” and he “stated unequivocally in an interview with the Jewish weekly The Forward, ‘My view is closer to AIPAC’s view,’” writes Ahmed Nassef.

Dean supports AIPAC and its serial apologia for Israel’s murderous and racist behavior. He named Steven Grossman, a former AIPAC head, as his campaign’s chief fundraiser. Soon thereafter, Grossman flew to Israel on an AIPAC-sponsored junket.

Like many “progressive” Democrats, Dean prefers the smoke screen of “humanitarian intervention” to paper over US war crimes.

“There are some circumstances which allow unilateral interventions. One is to stop genocide if no other world body had taken the responsibility to do that and, second, to defend the United States of America after an attack or to prevent an immediate attack,” he said when he ran for president.

Genocide. This was the excuse used by Obama and Hillary Clinton to launch the illegal invasion of Libya and the murder of 30,000 of its citizens. Both Clinton and Obama lied about this purported genocide. In fact, the “rebels” supported by the Obama administration engaged in genocide, killing black Africans.

Although he opposed the invasion of Iraq—primarily because Republican Bush and his neocons started it—Dean wanted US occupation troops to stay there indefinitely.

“This situation was created by Bush, who ignored the greater danger in Iran and North Korea and Al Qaida at home to do it,” he said. “This was a mistake, this war. And the president’s gotten into it, now we’re going to have to get out of it. But if we leave Iraq to chaos, Al Qaida may move in, if we leave Iraq to a fundamentalist Shiite regime with Iranian influence, we will be in both circumstances worse off than we were when Saddam Hussein was president.”

Iran, North Korea, and al-Qaeda “at home” (sic) are not a threat to America. The top danger to America—indeed, the world—is the US government, the Pentagon, and the military-industrial complex. This odious trifecta is now pushing for war on Russia and China.

Dean thought the overthrow of Gaddafi, the destruction of Libya, the murder of tens of thousands in that North African country was “very smart. You don’t put boots on the ground. You don’t commit trillions of dollars to a war in Iraq. You do it with the other tools that we have that frankly work much better over the long term because you don’t get a lot of public resistance—drones, special operations forces, use of intelligence agencies. That’s exactly what [Obama] did.”

Dean’s current role is to make sure antiwar Democrats remain ignored and stranded in the bleachers. After Trump launched millions of dollars worth of cruise missiles into Syria—thus violating international law and the UN charter—Dean berated one of the only antiwar representatives in Congress, Tulsi Gabbard. He essentially called her a traitor for opposing US intervention in Syria.

The former governor of Vermont said he’s “tired of people making excuses. This is no different than Trump making excuses for Putin. We’ve had enough of [alleged and subsequently debunked al-Assad chemical attacks].”

Dean said Gabbard should resign for “defending” al-Assad, in other words pointing out there is no evidence the Syrian leader did any such thing.

The Democrat party is the more energetic of the two establishment parties when it comes to war. Democrat administrations started every major war of the 20th Century—WWI, WWII, Korea, and Vietnam.

Finally, this is the strategy Democrats will use if they take back Congress next week. They will denounce their political opponents as violent racists and move to shut down venues such as Gab and other social media and internet platforms not mimicking state propaganda and either supporting or ignoring the endless wars grotesquely spun into humanitarian interventions.