How To Stop All Future Mass Shootings 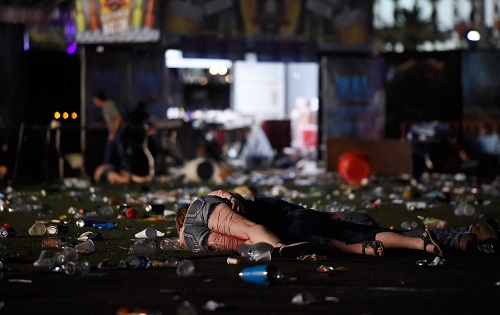 In my last article ‘A Tactical Analysis Of The Las Vegas Mass Shooting Incident,’ I outlined the precarious nature of the mainstream narrative and why the Vegas event in particular requires serious independent investigation into the possibility that Stephen Paddock did not plan or execute the event alone, or, he did not plan or execute the event at all, and someone else with far more tactical knowledge and shooting experience committed the murders outside the Mandalay Bay Hotel. Given that the FBI and Vegas sheriff’s timeline seems to change every few days and that Mandalay surveillance footage is locked up tight, I think it is safe to say that someone more professional, and not muzzled by bureaucracy, needs be involved.

Setting aside the inconsistencies in the official narrative, questioning the motives behind this particular attack does not really bring us any closer to a practical solution. Of course, if you are one of those people that obsessively embraces the “crisis actor” theory, then you likely think that nothing much needs to be solved because “no one actually died.” I am not very interested in this impractical theory reminiscent of ‘The Truman Show’, nor the people that promote it. It reminds me of the 9/11 hologram plane theory — remember, the theory designed to discredit the more legitimate 9/11 truth movement which included hundreds of scientists, architects and engineers with real arguments and evidence? Yeah, those establishment disinformation tactics did not go away; they are still being used today to undermine honest and rational investigations of other potential false flag events.

Ask “fake event” theorists for ANY concrete evidence that a single death was theatrical and that thousands of concertgoers and their families are part of the conspiracy, and these guys will demand that YOU show them the dead bodies and prove that the event “wasn’t faked.”  In other words, you must prove a negative, which is of course impossible.

Tell them you happen to know people with friends and family who were harmed in the event and they’ll call you a liar or a government “agent.” Show them numerous photos of dead bodies and they’ll claim the bodies are actors. Show them first hand accounts of people on the ground — hey, all those people must be actors, too. Ask them for proof again and they’ll try to pawn the burden of proof off on you; proof that they will then again deny when it is presented. It is a pointless circle of idiocy that makes alternative research look ridiculous.

If the establishment is seeking to stage a false flag, why go through the trouble of an elaborate, costly and harder-to-contain Kabuki play with numerous actors that might not keep quiet when they could simply shoot some real people with real bullets and be done with it?

This article will be focusing on the very real shooting (and attacks like it) which did in fact occur. Perhaps not the way that the mainstream media and the FBI claim, but still taking place all the same. How do we prevent such attacks in the future? What about Gladio-type false flag events (the Vegas event has numerous Gladio markers)? Can those be stopped, or is this an impossible task?

As far as false flag attacks are concerned, the long-term solution would be to nullify the people who fund and plan these scenarios. Until the day this is accomplished, though, we need some short-term protections.

I believe it is indeed possible to stop future mass shooting events, and to be sure, the solution does NOT involve further gun control measures or confiscation. Why? Because gun control does nothing to prevent mass shootings.

Just take a look at the Paris attacks perpetrated by ISIS. France has strict gun laws in line with what gun control advocates in the U.S. would like to see implemented. Even off-duty police officers in France were not allowed to carry their sidearms until after the Paris attacks in 2015.

French gun laws did nothing to stop ISIS terrorists from killing over 130 people in a single night using weapons already highly restricted in the country. All they accomplished was disarming innocent citizens and making them easy targets.

The nation of India also has some of the strictest gun laws in the world, yet this did nothing to prevent the Mumbai attacks in 2008 in which 164 people were killed.

Norway had extremely tough gun laws in 2011, but these were easily circumvented by Anders Breivik who murdered 69 members of a Workers Youth Camp on the island of Utoya.

As I noted in my previous article, the Vegas attack was initiated using more complex sniper-like tactics as evidenced in the choice of the shooter’s perch as well as in the calculations for bullet drop from an elevated position. I believe this was done quite deliberately; most mass shooters tend to be poorly trained and attack a crowd haphazardly at point blank range in order to achieve maximum casualties in the shortest amount of time. However, in Vegas, and Nevada in general, the likelihood of running into a person with a conceal carry weapon is rather high. Paddock (or whoever) might not have lasted more than a minute before being confronted with multiple defenders armed with their own sidearms.

The Vegas shooter was smart to avoid a point blank, ground level confrontation. But how do we make future shooters think twice about longer range attacks at crowded events?

The federal government and DHS will probably call for stricter security measures in locations in which many people congregate. I would not be surprised to see demands for TSA-style security in streets in major tourist areas and at concerts, sporting events, etc. Body scanners and luggage scanners in major hotels? Count on it, eventually. Hardcore anti-gun ordinances within major cities, much like the gun measures in places like Washington D.C.? Do not be shocked.

As mentioned above, none of this will really stop a determined mass shooter or terrorist (and certainly not a false flag), but without an alternative solution, frightened people have a tendency to go along with the deluded notion that more government means more security.

Vegas is not a stranger to crisis, but it seems to have forgotten how to prevent it. Many Americans are unaware that back in 1992 during the Rodney King riots, Las Vegas had to deal with its own major civil unrest with millions of dollars in damage and multiple deaths. This was barely reported because of Vegas’s habit of burying stories that might stain the tourist destination’s fun-loving image. But, it did take place.

West Las Vegas erupted in violence in the wake of the Rodney King trial, including snipers shooting at police officers and bystanders, but the Vegas Strip went largely untouched. This was perhaps because hotel and casino private security at that time had a reputation for being rather well armed and vicious. Many hotels had their own rooftop shooters ready and waiting. Given, Vegas was still highly “mobbed up” in the 1990s, but one must admit that their security was not to be trifled with.

No major federal measures were needed and intrusive security was minimal. Can this effect be achieved again (without the mob)? Yes.

If mass shooters, terrorists and “others” seek to attack highly populous events using advanced tactics, then the organizers of these events should be employing private security groups with applicable tactical training and experience. There are thousands of well-trained veterans and civilians out there with the skills necessary to stop an active shooter, and they are not being employed where they are most capable. A team of two people trained in counter-sniping positioned near the concert at the Mandalay Bay could have cut down the shooter within a couple minutes rather than 10 minutes (or more), saving dozens of lives.

What I am talking about is the employment of quiet, vetted and tested professionals hired out for specific events in which large crowds will be present.

The Feds are not needed and, in most cases, not wanted. Private security firms WITHOUT federal affiliations could handle the protection of major venues without constitutional violations by simply placing people at events with the proper training. The mere presence of these people may even act as a deterrent for future attacks.

Security should also be organized and managed independently from the venues which they are tasked to protect.  As we have seen recently with the very odd behavior of MGM security employee, Jose Campos; including his disappearance right before he was expected to give his accounting of events at the Mandalay and his sudden reappearance on the Ellen Show to give a farce of an interview devoid of hard facts or timeline confirmations, rent-a-cops owned by the venue are more vulnerable to manipulations and possible “coaching” after a crisis event occurs.

Excitement seekers and the public at large should avoid events that refuse to pay for truly independent and tactically skilled security, and instead choose typical rent-a-cops, retired cops and moonlighting cops that need extra cash. It is clear in light of the Vegas attack that these people do not have the ability to obstruct any attacker using more advanced combat strategies. Nor are they likely to be honest about what really happened after the fact.

On top of this, more training and more responsibly armed Americans continue to be the best methods towards defusing and deterring active shooters. The point is, if the American public does not pursue alternative solutions and take tactical realities into account, then the only other option will be government interference on a scale that will promote totalitarianism in the name of safety. It is time for the American people to grow up, stop waiting for Big Brother to protect them and start taking their security into their own hands.