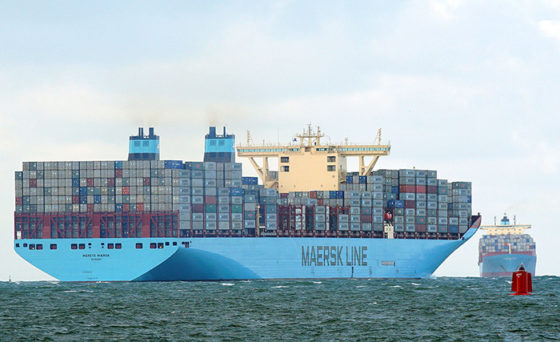 If the general public understood how vulnerable our reliance on global shipping made us, they’d all become preppers overnight. Trucks, planes, and cargo ships are responsible for just about everything modern life depends upon. This reliance on global goods and long-distance shipping puts us all at risk.

Our Dependence Upon Global Shipping

Modern shipping keeps us clothed and fed. It brings us necessary medicines, fuel to the pumps, and delivers chemicals necessary to municipal water treatment plants. It is truly amazing how seamless it all appears to the average consumer, especially considering shipping’s global scale.

That is until there is a problem. Problems can be anything from a trucker’s strike to a plane crashing to a cyber attack shutting down the largest global shipping company.

Global shipping is a necessary evil in a world where we rely on global goods. When companies take their manufacturing operations overseas, the first thing we think of is lost jobs. But, we also put access to those goods at risk. Some of these risks include:

A perfect example of this is shipping fresh food to Alaska all year long. Alaskan grocery stores do what they can to stock Alaska-grown items on their shelves, but due to the climate, Alaskans rely on imported produce and goods. The Anchorage Daily News reported on the impact of a single ship being delayed by just 24 hours for a repair.

Here’s what one of their agriculture experts had to say about why Alaska imports so much of its food.

Much of Alaska’s food comes up by container ship over the water. Some also arrives via trucks that take the Alaska Highway, or by air freight.

“It’s cheaper to barge or fly it in than it is to grow it here,” said Stephen Brown, a Palmer-based district agriculture agent with the University of Alaska Fairbanks. “The problem with that is that creates a very fragile food supply that’s very easy to be disrupted.” (source)

Further into the above-linked article, a recent disruption came when a ship needed repairs before heading up to Alaska.

A Tote Maritime Alaska ship was the one that was late getting to Anchorage last week, due to a weld that required a repair by divers in Tacoma.

“When there are disruptions to that supply chain, things can become difficult rather quickly. That’s when you can start to see shelves looking a little bit thinner. … Nobody wants to buy 2-week-old strawberries that are half-rotten,” said Grace Greene, vice president at Tote Maritime Alaska. “Having a tight supply chain is really critical.”

Cyberattacks Can Shut Down Global Shipping

This isn’t just an Alaska problem. Disruptions in shipping can happen anywhere and on a much larger scale. Recently, global shipping giant, AP Moller-Maersk, was hit by a major ransomware attack. This left ships sailing off course and ports were unable to accept ships.

The cyber attack was among the biggest-ever disruptions to hit global shipping. Several port terminals run by a Maersk division, including in the United States, India, Spain, the Netherlands, were still struggling to revert to normal operations on Thursday after experiencing massive disruptions. (source)

This was a wake up call for many in the industry. The article goes on to say

“The Maersk attack raises our awareness of the vulnerability of shipping and ports to technological failure,” said Professor David Last, a previous president of Britain’s Royal Institute of Navigation.

“When GPS fails, ships’ captains lose their principal means of navigation and much of their communications and computer links. They have to slow down and miss port schedules,” said Last, who is also a strategic advisor to the General Lighthouse Authorities of the UK and Ireland. (source)

There’s a Shortage of Truck Drivers

Add to this that we are experiencing a shortage of truck drivers due to fewer people looking for work, plus increased shipping costs due to increased regulations. The CEO of Tyson foods says:

“These additional costs are included in our outlook,” he told investors and analysts Feb. 8. “However, we’re assuming we’ll recover the majority through” higher prices for consumers.

The tightness in the trucking market probably won’t ease any time soon. Employers can’t find enough drivers — at least at the wages companies want to pay — as low unemployment spurs competition from other industries.

Construction jobs, for example, pay on par or better and allow workers to be home more with their families. Long-distance truckers can be on the road for weeks at a time. (source)

If a kink in the chain develops, there are fewer people capable of stepping in when needed.

Imagine If Truckers Went on Strike

If long-haul truckers were to strike, the store shelves would be bare within days. Everything from food, medicines, toilet paper, to gasoline would disappear from store shelves. Life as we know it would come to a grinding halt.

Back in 2008, diesel fuel prices rose so high that truckers protested and rallied in cities across the US, threatening to go on strike.

Independent U.S. truckers are planning to stop hauling freight Tuesday in protest of record-high diesel prices that drivers say they can no longer afford.

Independent truckers, who constitute 90 percent of the nation’s trucking fleet, are being hit especially hard by soaring diesel prices and compensation lags far behind rising costs, according to the American Trucking Association. (source)

Thankfully, we didn’t experience a nationwide trucker strike that time. The economy was already on shaky ground as it was.

So, how long would we really have? You need to check out this article with a video on how we only have about five days before things get really bad. Two quotes from the video really stood out to me. First:

“The growth and population in this country, and the need for the movement of goods and services, is literally going to overwhelm the infrastructure as we know it today.”

And the second quote:

“We are now investing a smaller percentage of our Gross Domestic Product in transportation infrastructure than many third world countries.”

This is a recipe for a disaster if I ever saw one. According to the video, here’s what our situation would look like within 5 days:

How Would You Have Fared?

Had truckers gone on a nationwide strike, or if the Petya ransomware attack had interfered with Maersk shipping for more than a few weeks, how would you have held out?

Thankfully, most of the scenarios that would impact shipping are temporary, perhaps a few days to a few weeks. Having just a three-month stockpile of food and supplies would cover most emergencies, including shipping delays.

You can easily put three month’s worth of necessities aside by adding by buying an extra food item each trip for your pantry. As for your other supplies, look at the five days detailed above. Use that as a guide for what to stock up on.

Here are a few more things to keep in mind.

And finally, get more toilet paper than you think you need. There are options, like personal cloths, squeeze-bottle bidets, and scrap paper, but none of them are quite like toilet paper.

The more you localize your family’s supply chain, the better off you’ll be during a disruption.

Any other ideas for prepping for an interruption of shipping?

Let me know in the comments.

Cat Ellis is an herbalist,  massage therapist, midwifery student, and urban homesteader from New England. She keeps bees, loves gardening and canning, and practice time at the range. She teaches herbal skills on her website, Herbal Prepper. Cat is a member of the American Herbalists Guild, and the author of two books, Prepper’s Natural Medicine and Prepping for a Pandemic.